"The sepulcher of Humayun is in a large room spread with rich carpets, the tomb itself covered with a rich shamiyana, canopy, overhead, and in front certain books on small trestles, by which stand his sword, turban and shoes."

The carpets, the canopy over the cenotaph, or Emperor Humayun’s belongings no longer exist here. Nor does the gilding on the dome and glazed tiles on the walls, reducing the tomb chamber to a shadow of its former splendour. In 1955, repairs within the mausoleum removed remaining tile work from the wall surfaces. Following this, in more recent years, lime plaster was gradually replaced with cement plaster and the entire wall surfaces covered with coats of lime-wash. In order to ensure long term preservation as well as present the building in a manner it was designed to appear by the Mughal builders; modern cementitious materials have been removed and replaced with traditional lime plaster.

The wall surfaces with balconies looking into the tall tomb chambers are the predominant architectural features of the tomb chamber. These walls had been covered with layers of paint applied at regular intervals, thus altering the white marble like appearance desired by the Mughal builders to a dusty, dirty brownish hue.

Careful removal of cement and paint layers has revealed, incised plasterwork in a netting pattern with red polychromy on the edging of the archways. Cement plaster and decayed lime plaster was removed from all wall surfaces and replaced with a traditional lime mortar mix. Portions of wall surfaces where original lime punning was found preserved were carefully retained and the remaining wall surface applied with a matching final plaster layer.

In an attempt to revive the interiors of the Tomb chamber, which according to the historic texts were adorned by fabrics and lamps, new hand-crafted brass lamps made in Cairo for over a year were installed in the main chamber and the West Gate.

In the 20th century, doorways linking the principal tomb chamber to the four corner chamber were blocked with sandstone lattice screens thereby altering the intended circulation as well as creating management problems as the northern chambers were accessible only from outside. Careful study of the mausoleum revealed that pivot holes meant for wooden doors were occupied by stone jaalis. Archival research revealed that these jallies were placed in 1955 after the doors were probably used for firewood when the Humayun’s Tomb complex was used as a refugee camp. After prolonged consultation it was agreed to remove the 20th century lattice screens and replace these with wooden doors. The lattice screens from the northern chambers have now been removed, allowing visitors to access these chambers. 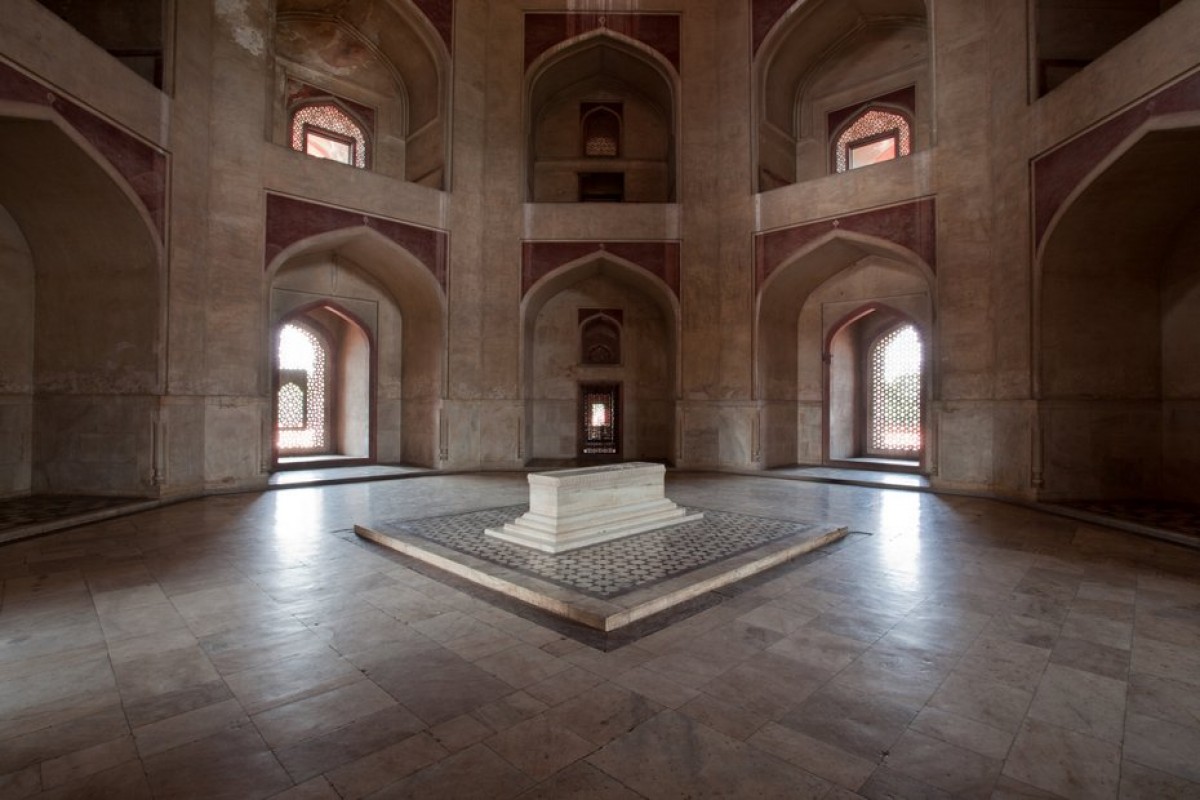 The Main Hall - before conservation in 2010 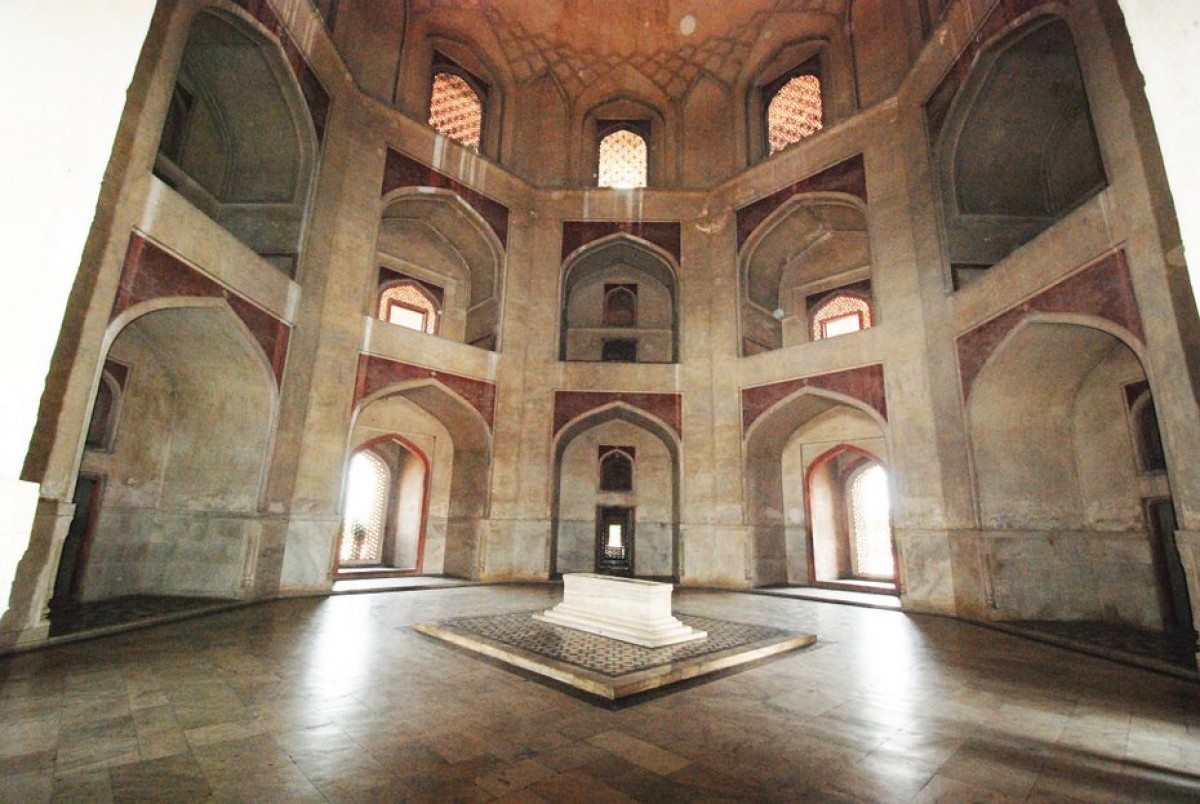 Cement patches in the main hall before conservati 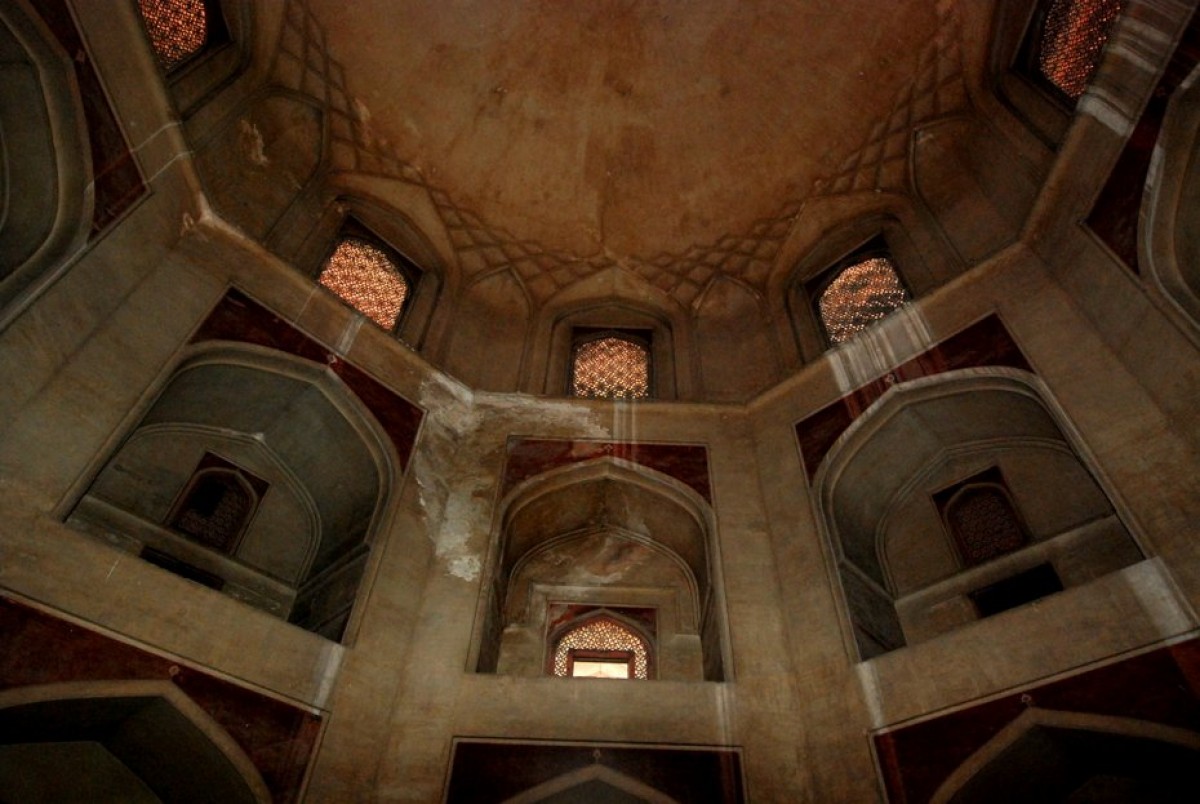 Water seepage into the main hall from the 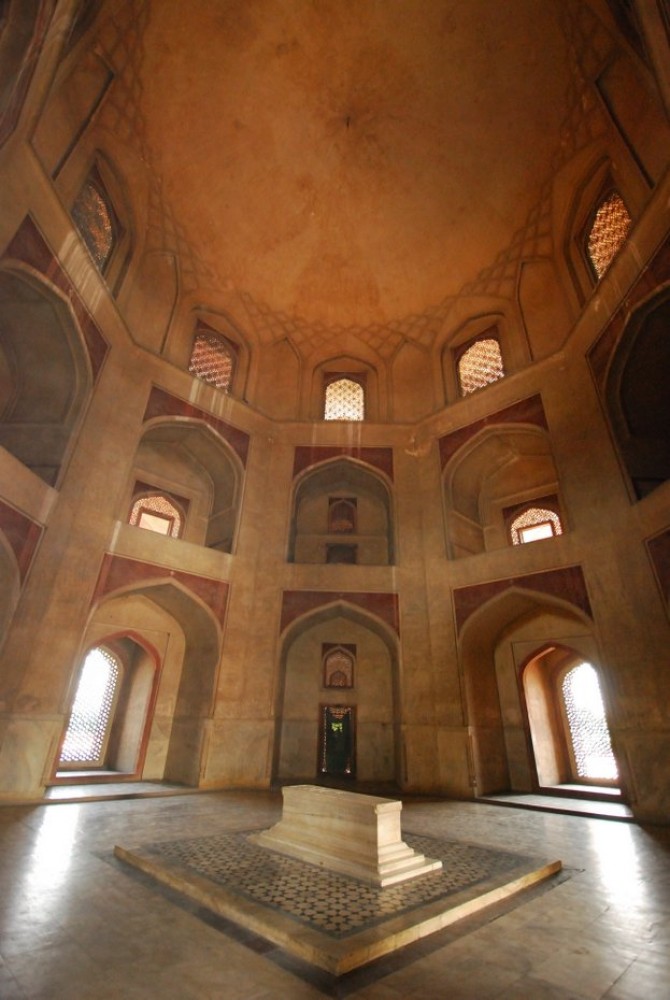 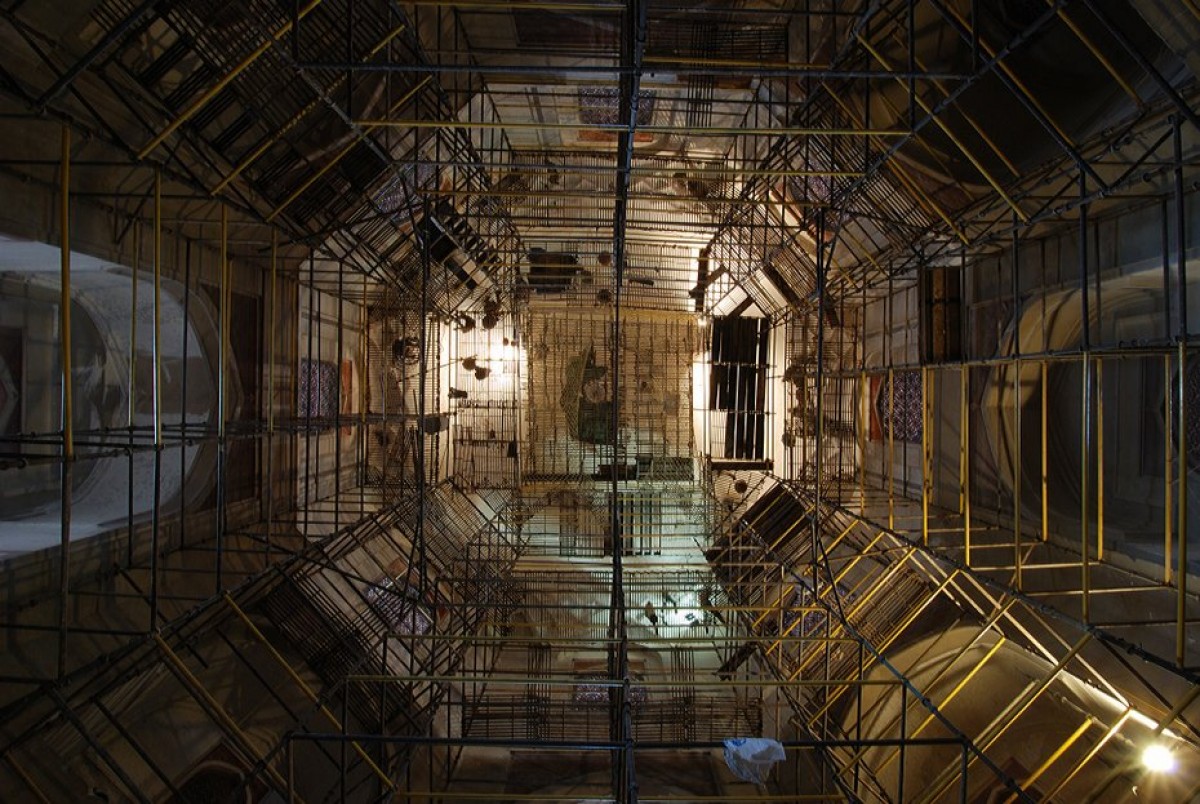 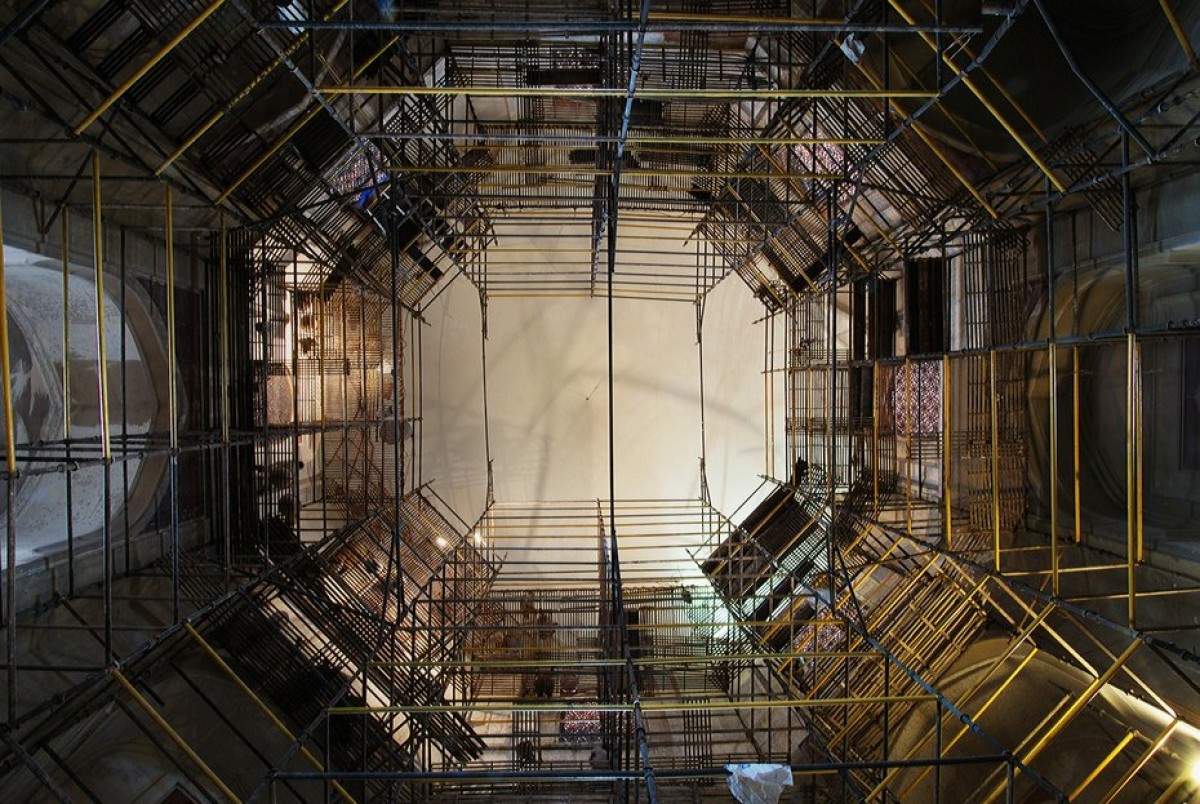 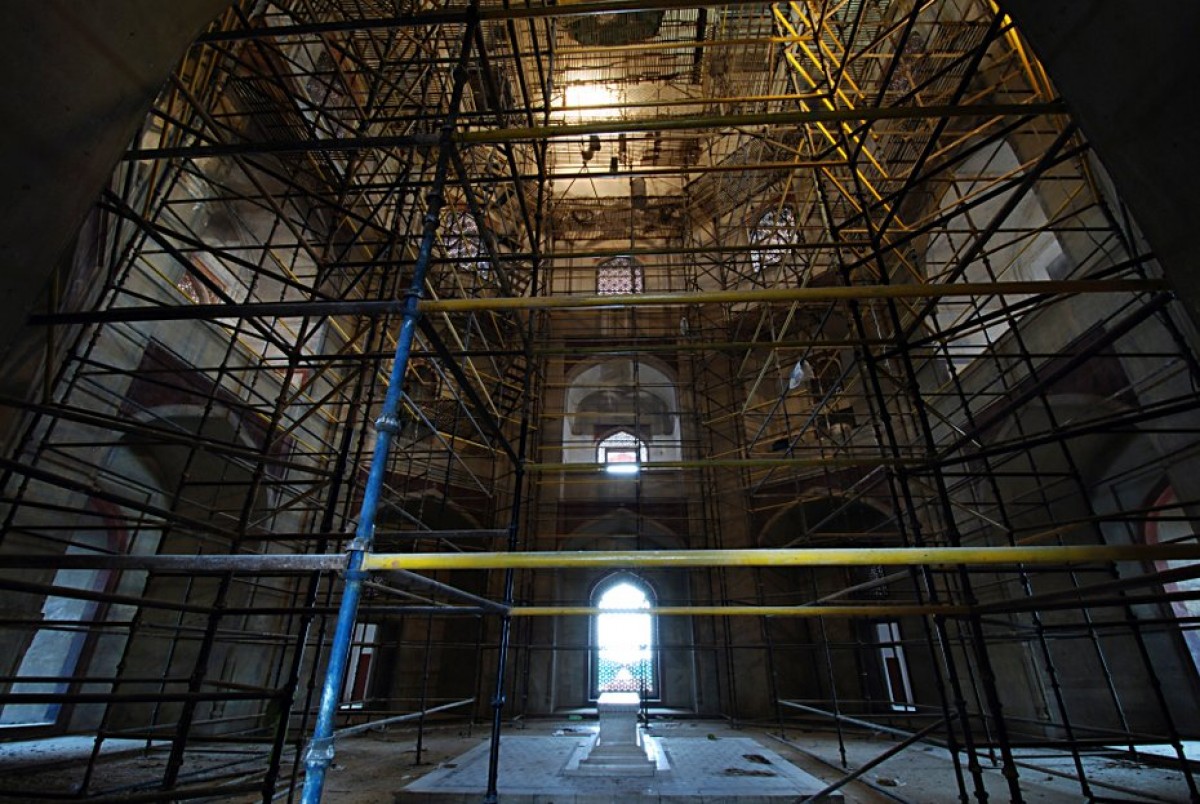 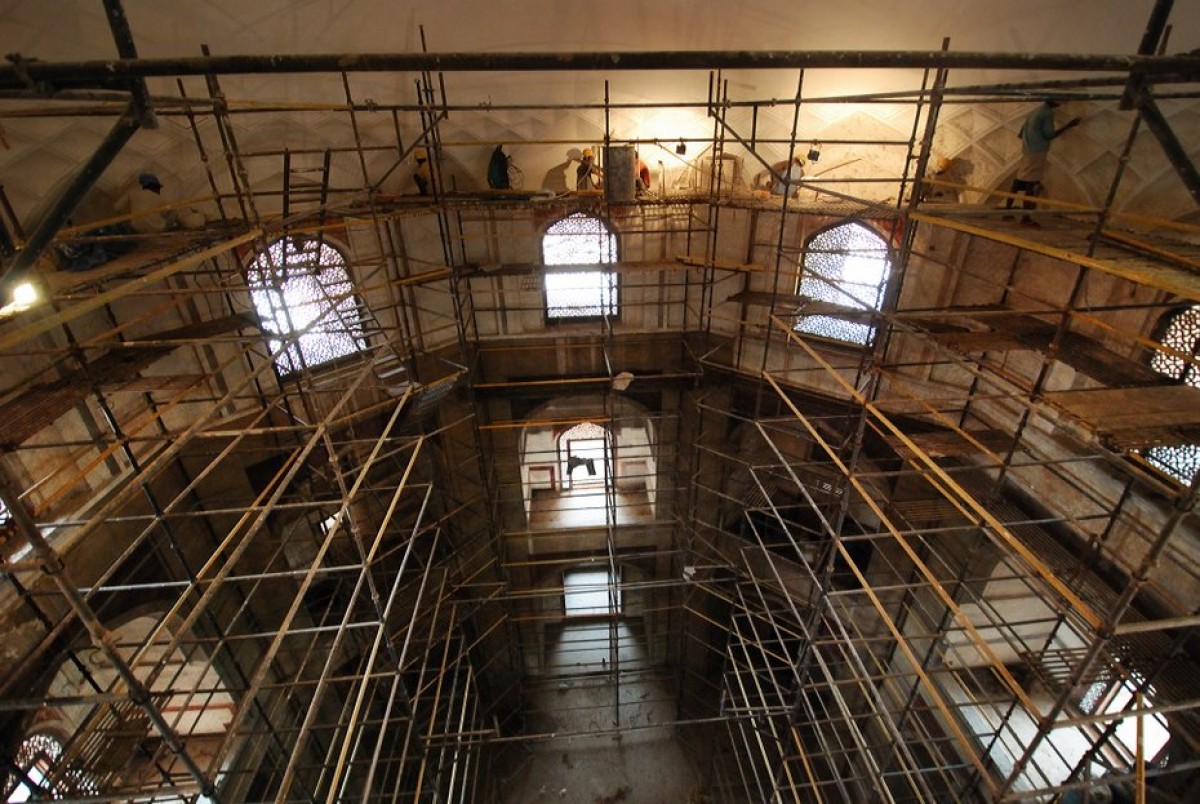 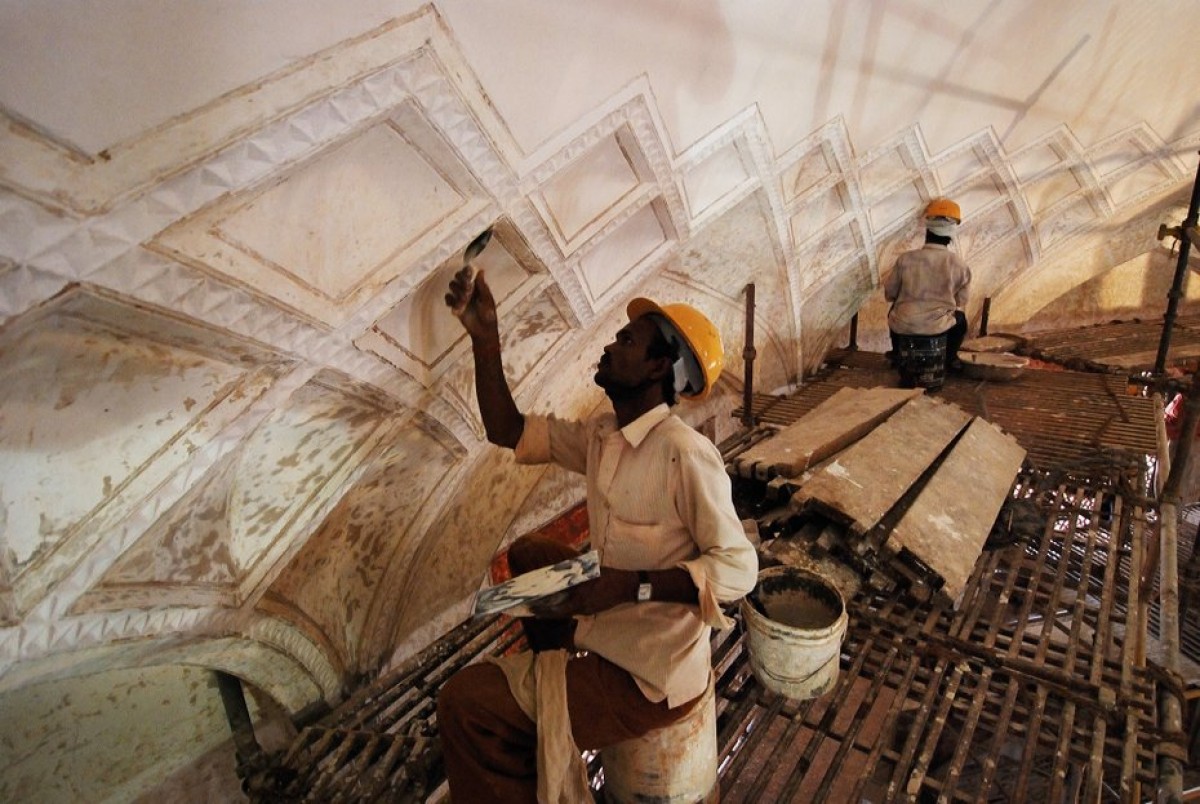 Craftsmen restoring the muqarna patterns in the ceiling 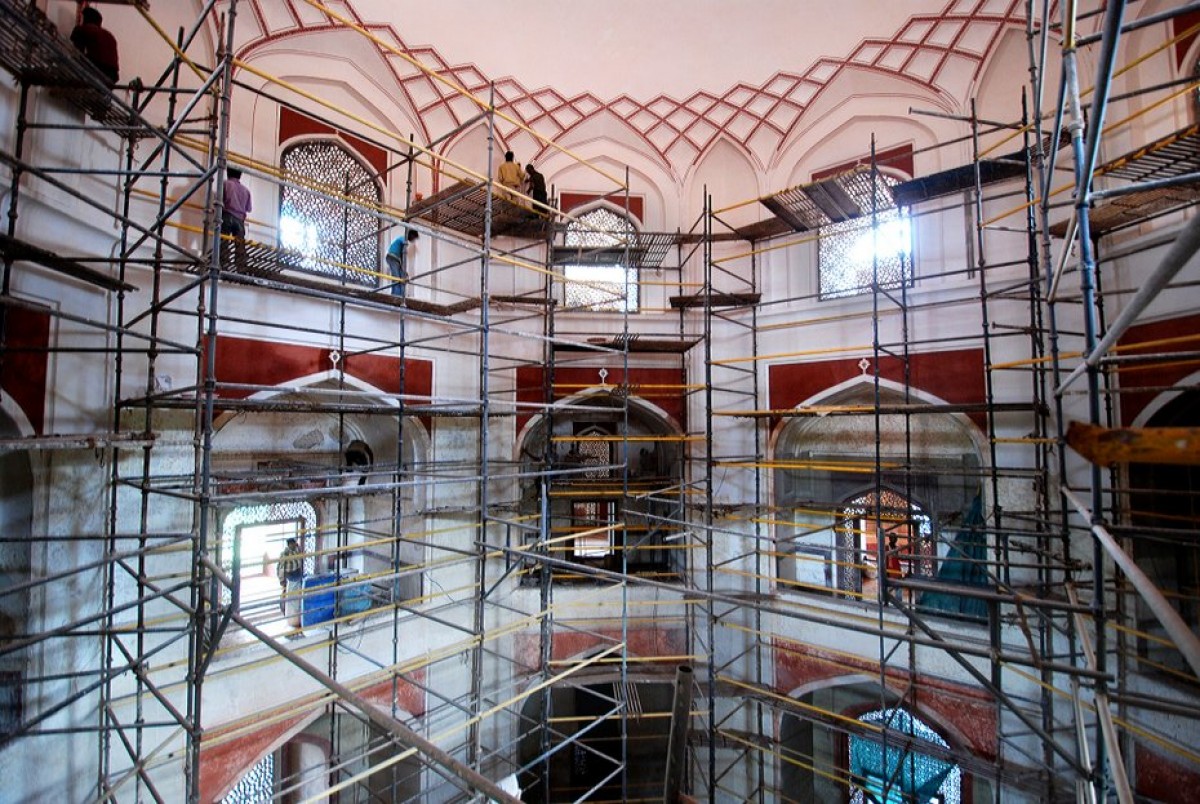 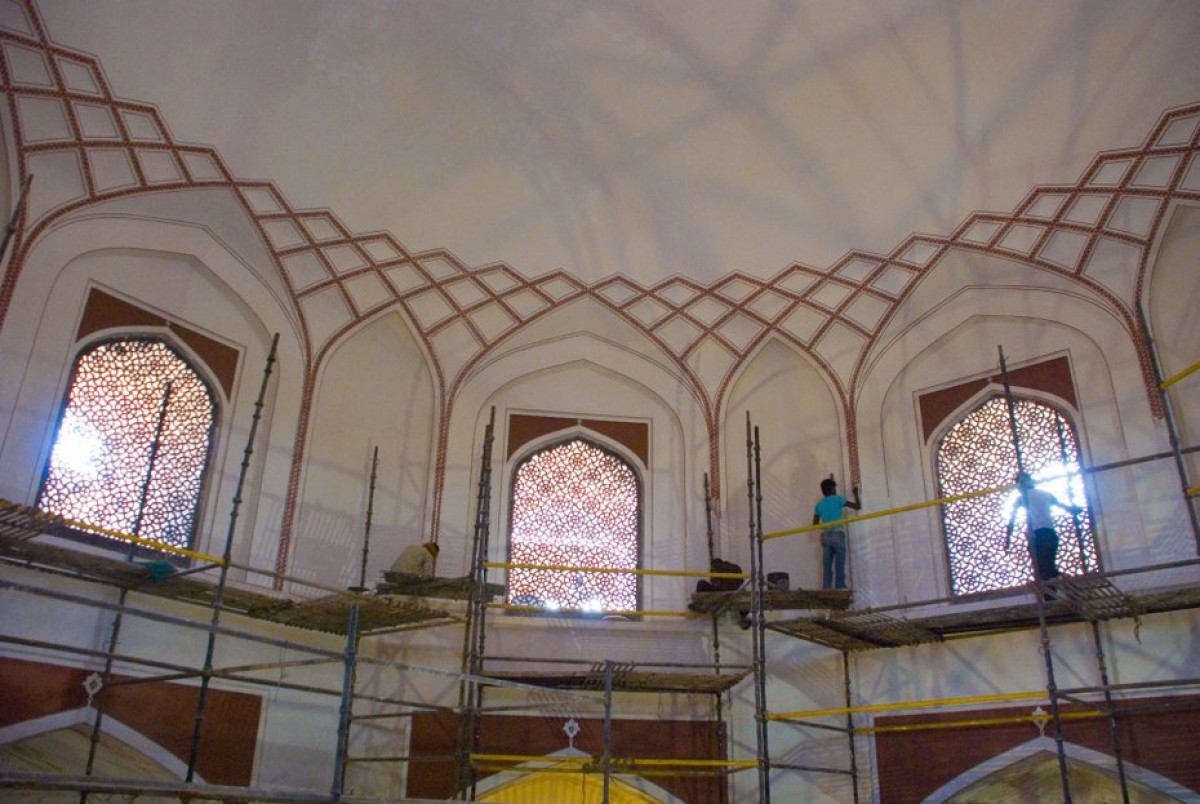 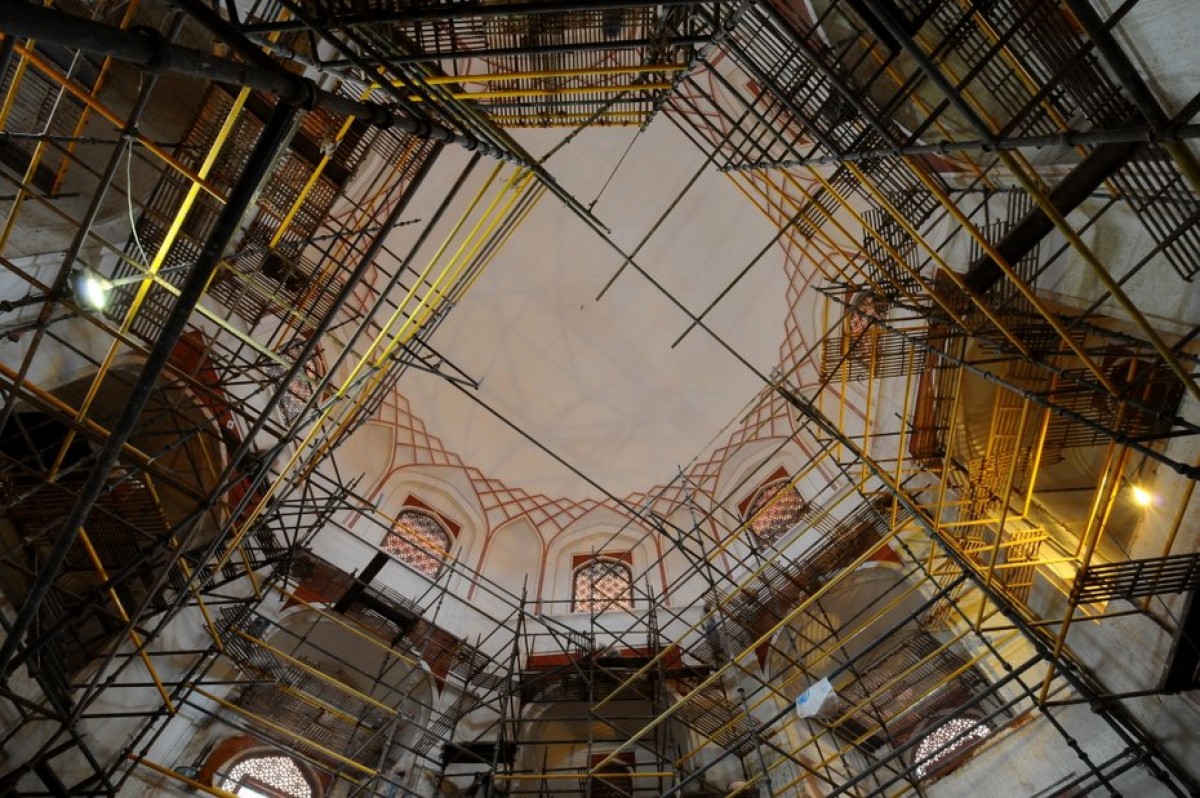 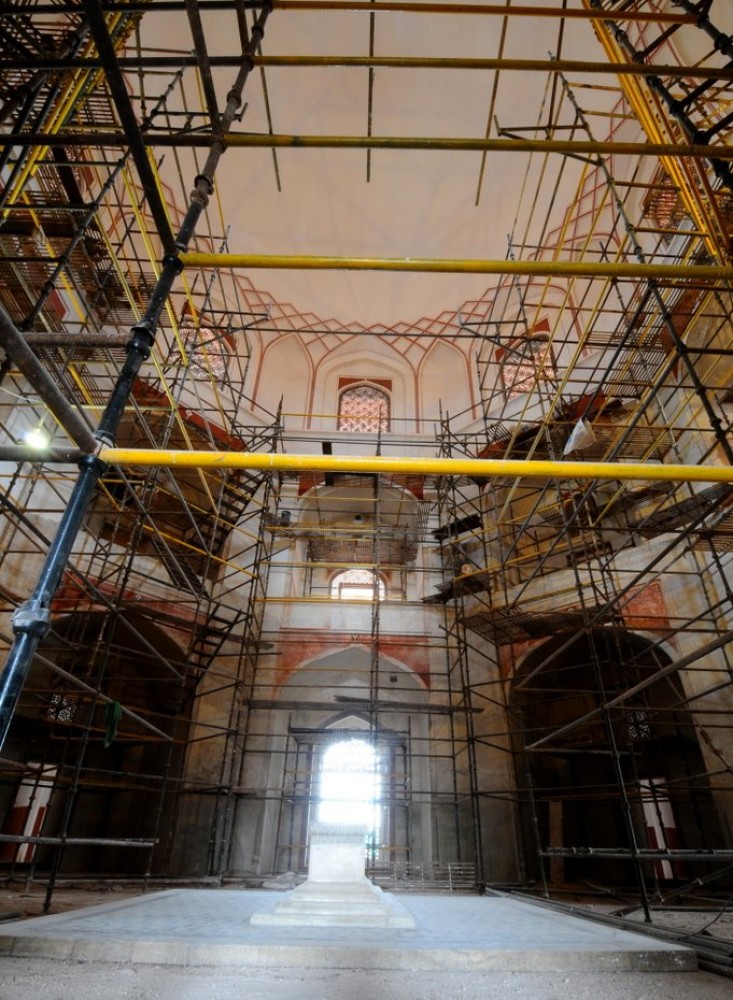 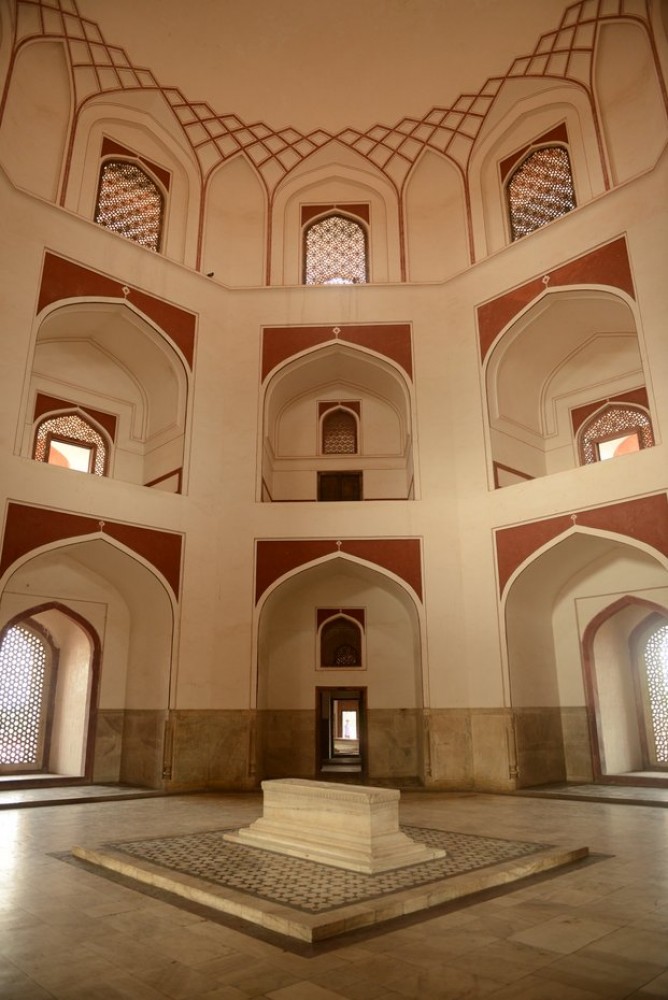 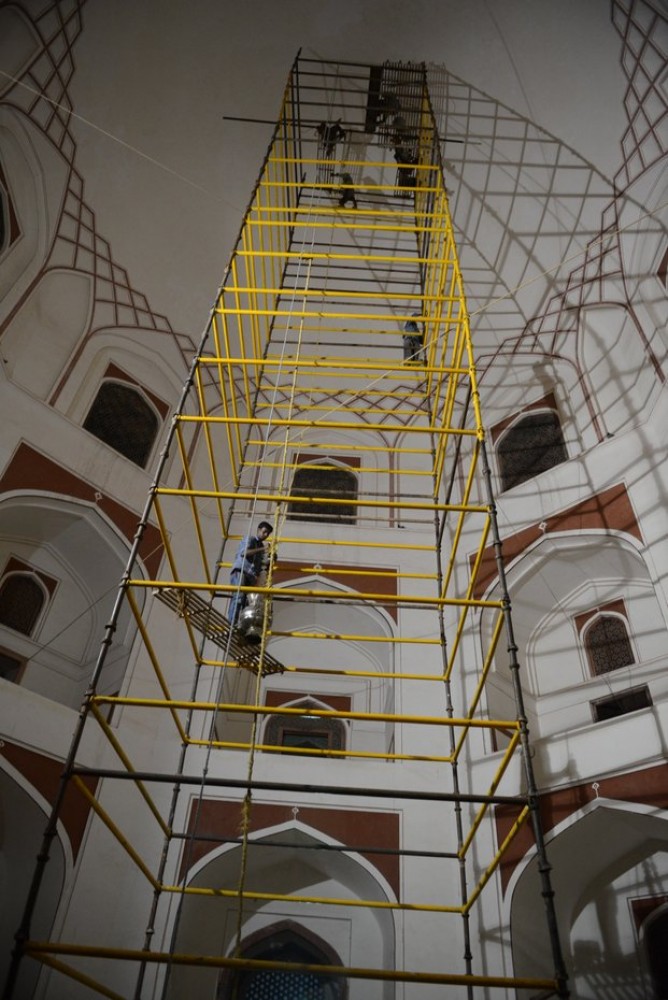 Installing lamp in the Main Hall 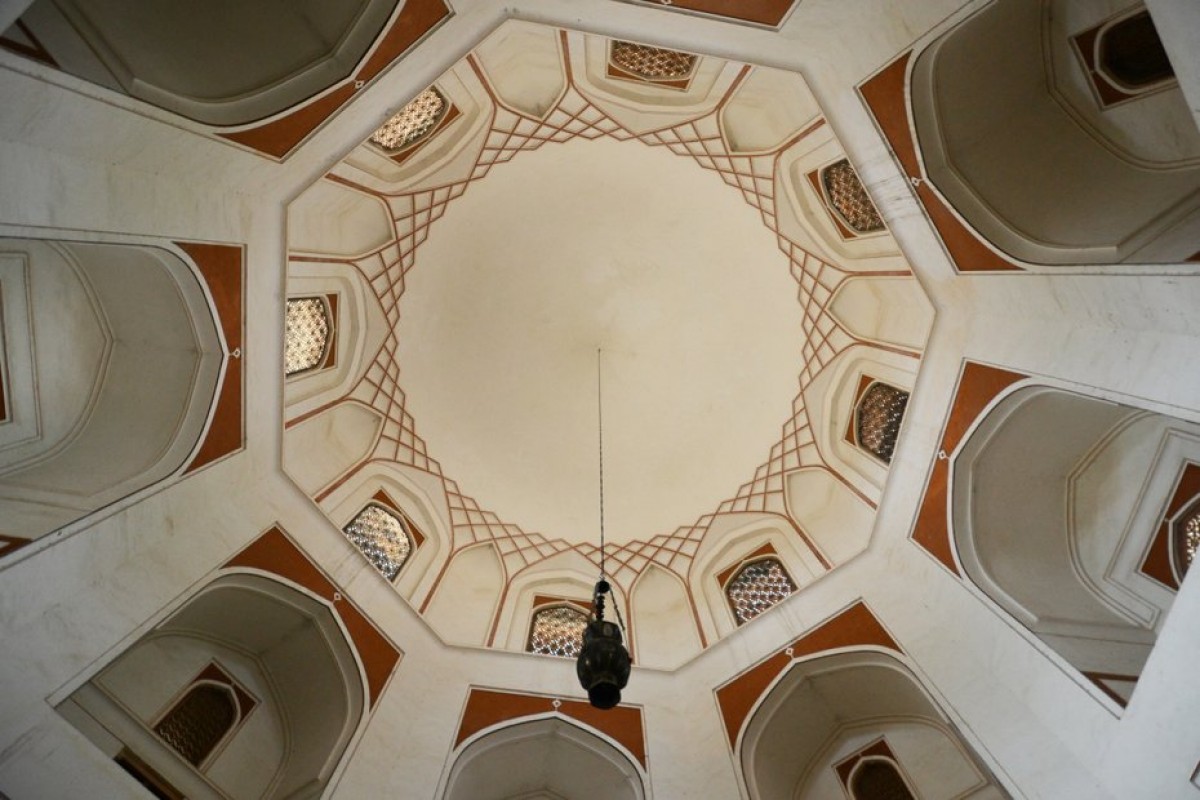 Lamp installed in the Main Hall, 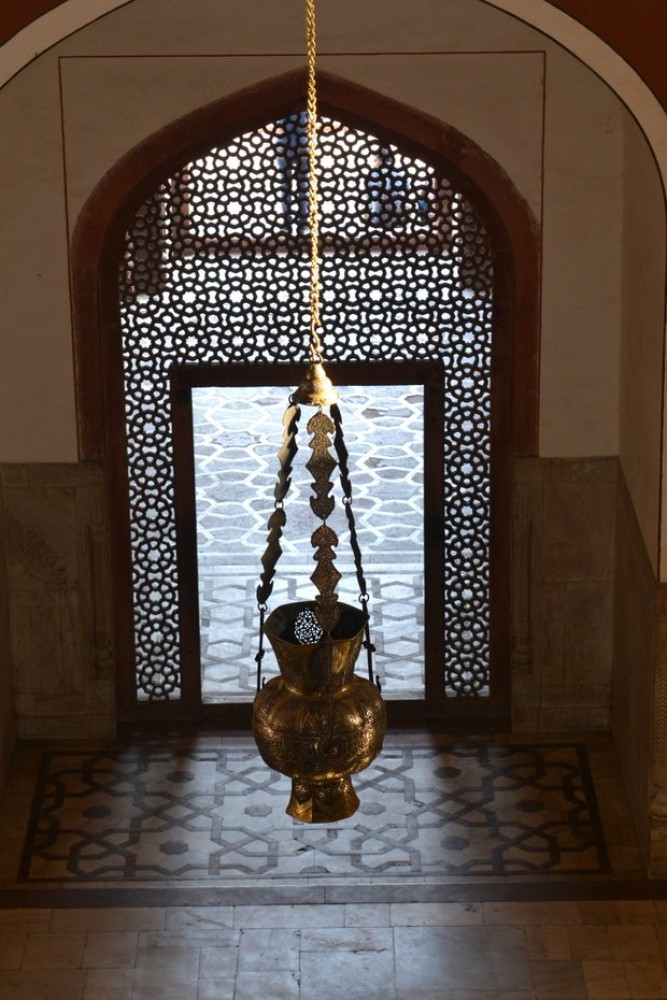 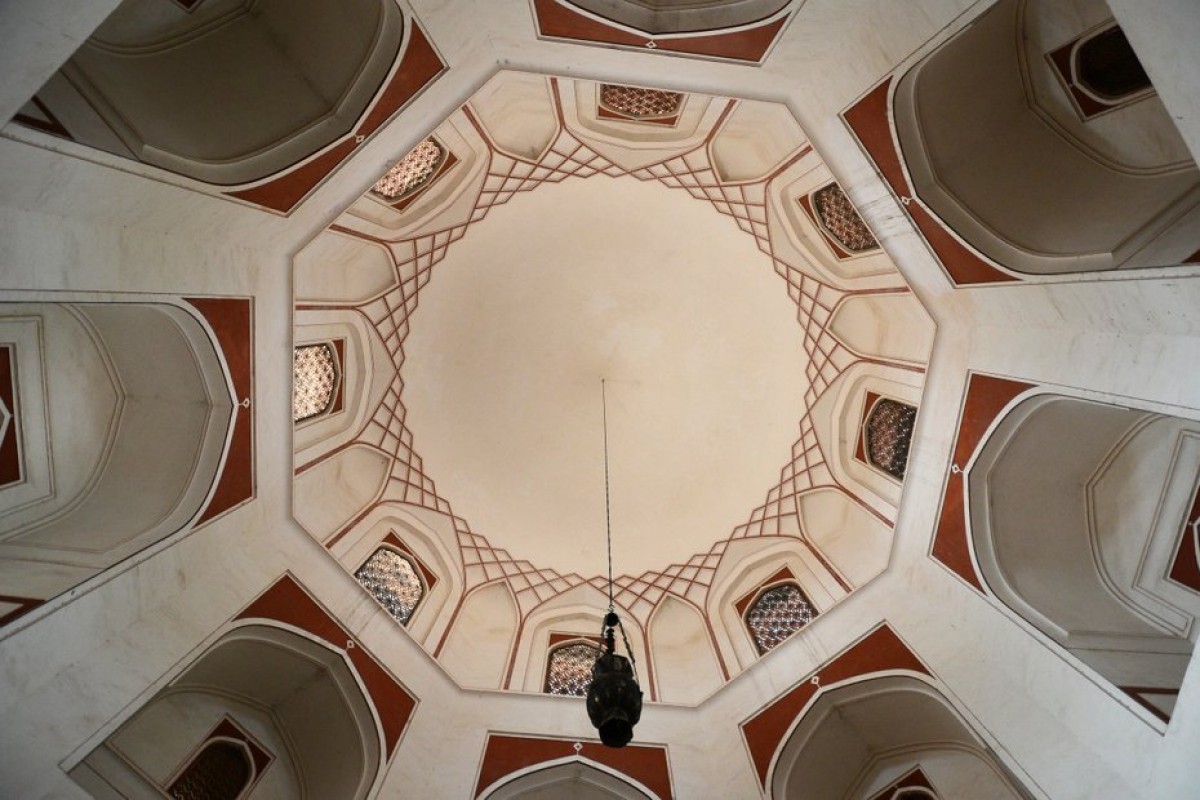 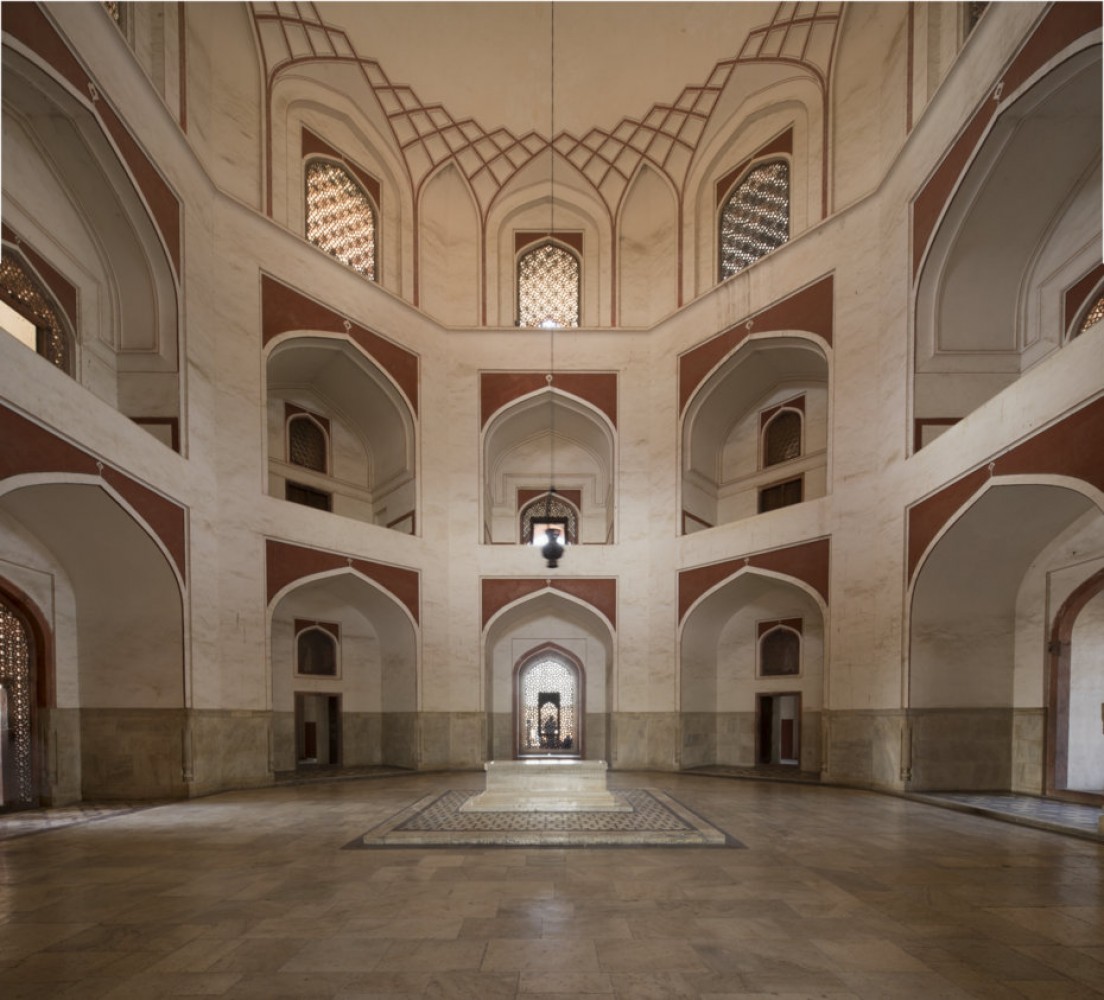 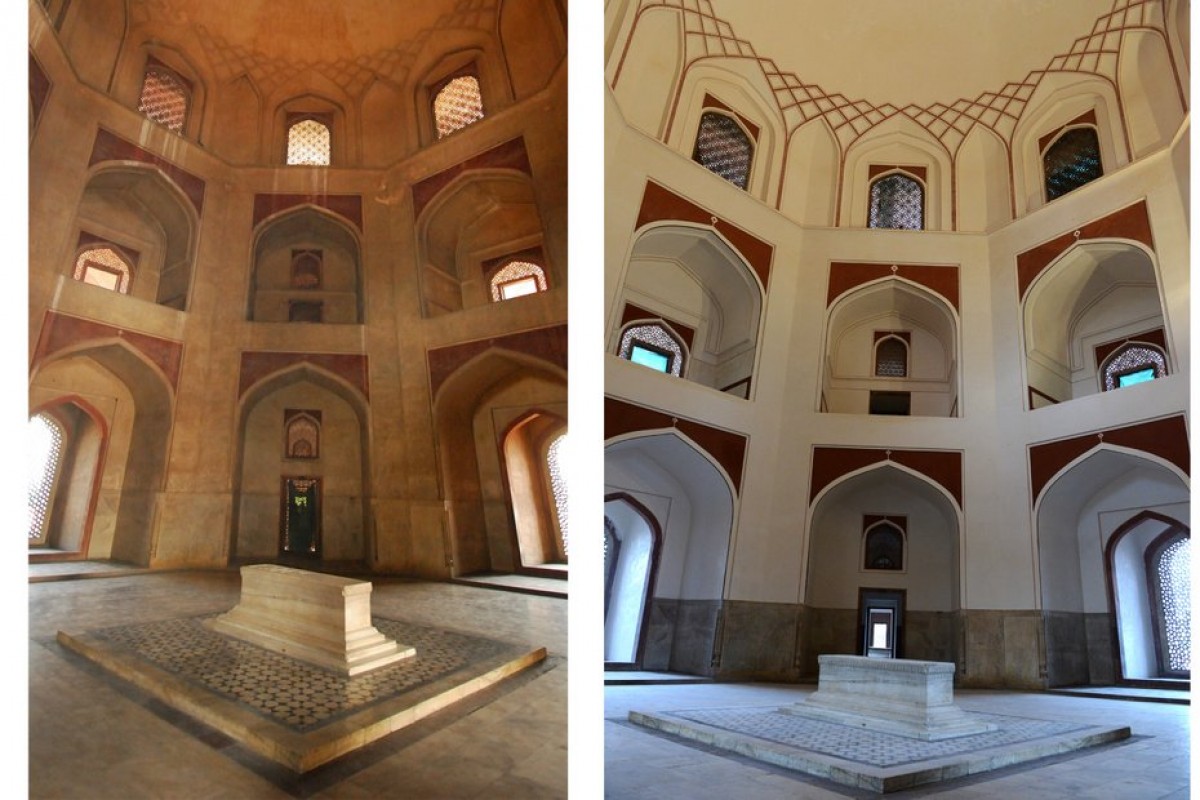 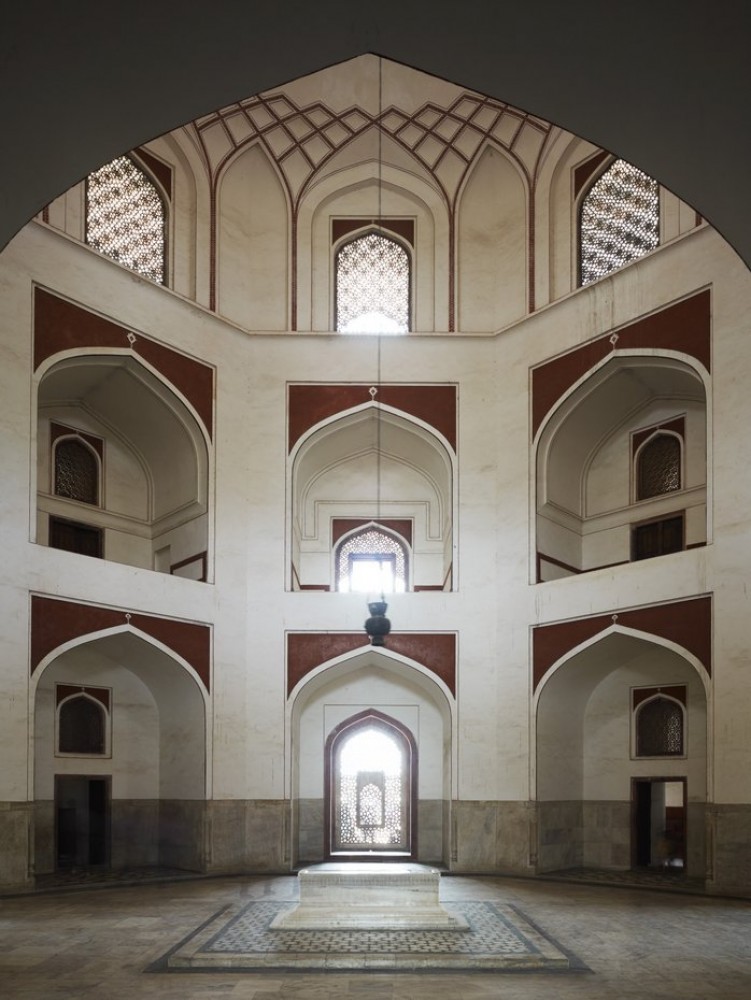 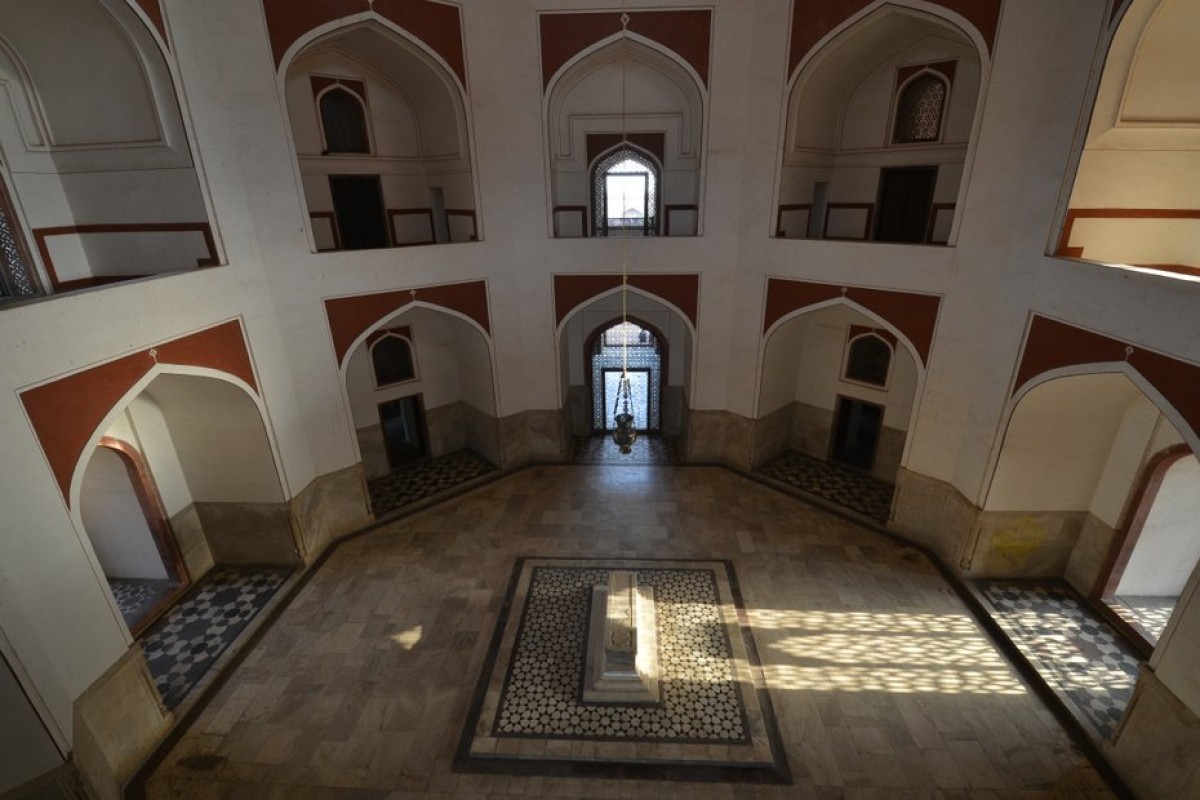 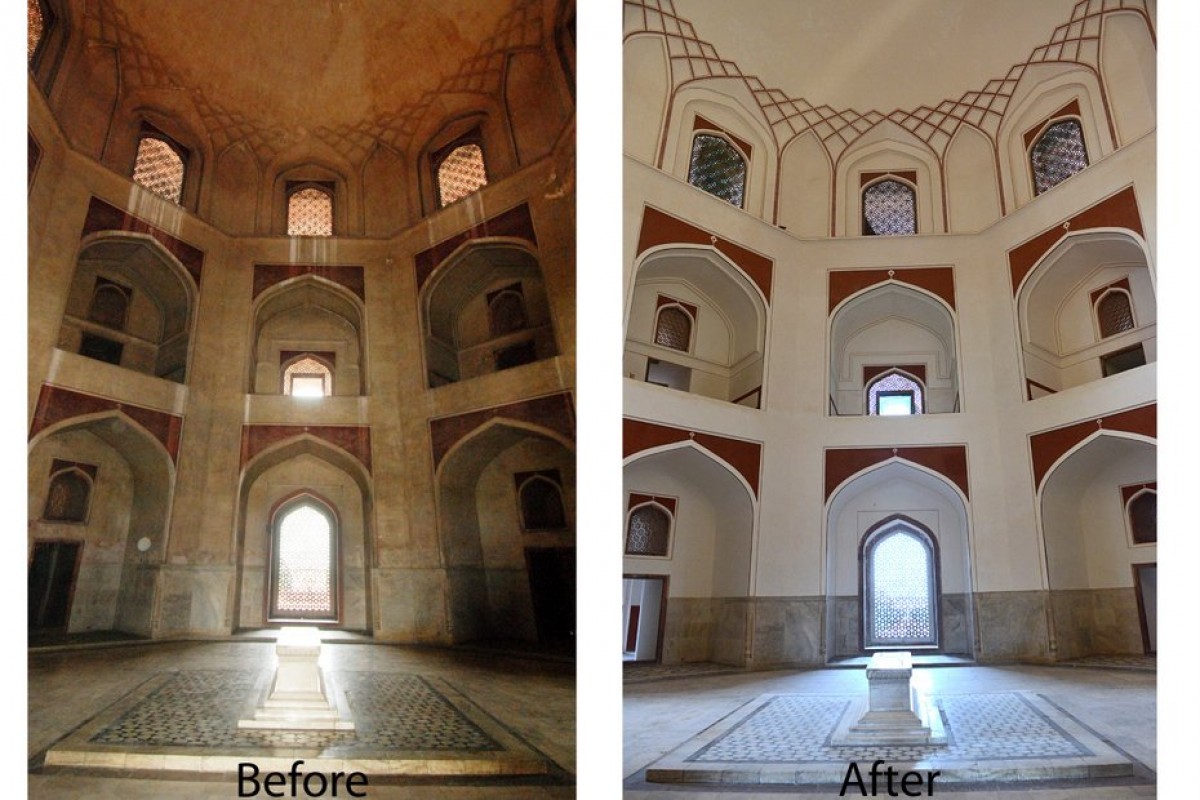 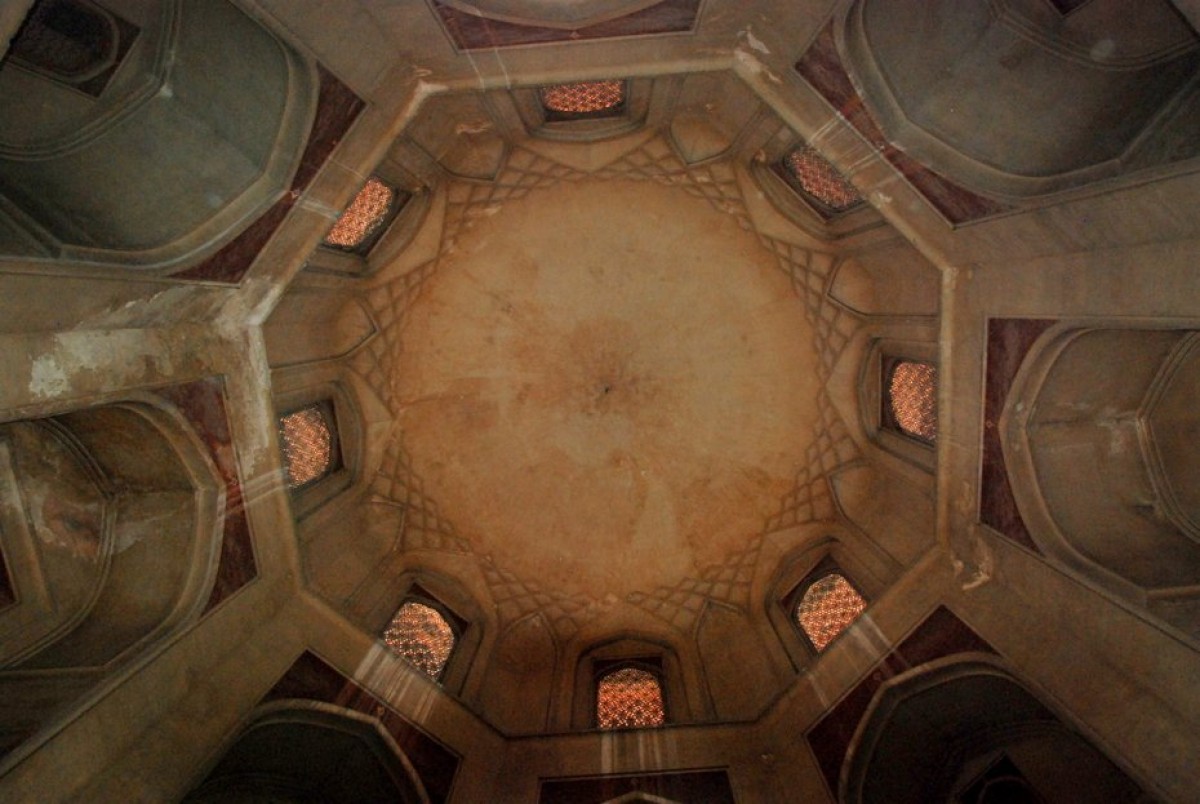