Conservation works on the lower plinth commenced in 2008 with archival research, which helped in understanding the changes that have occurred at the site over the past 200 years. Information collected from various sources like the annual reports and photographs from ASI archives, American Institute of Indian Studies, National Archives, and online resources such as the British library and the Victoria and Albert, revealed that a layer of cement concrete was laid over the heavy quartzite blocks of the plinth. This was probably done to provide a level walking surface but this inappropriate intervention disfigured the historic architectural character and compromised the material authenticity 1956.

In 2009 before starting the works, a small section of the lower plinth in the North-East corner was exposed, which revealed stone blocks underneath the concrete layers. The exposed DQ flooring was surveyed and the existing condition was analyzed to arrive at an appropriate conservation process with appropriate levels for leveling, repairs, resetting and redressing of the DQ stones.

Following the site inspection by the ASI-AKTC team, it was decided that the concrete layers form the DQ floor of the plinth will be removed using appropriate tools without damaging the original building fabric underneath. The portion of plinth at the western entrance was found without the base DQ stones, leading to conclusion that these were removed when the sandstone paving was installed in this area.

Hand-dressed DQ stones were used to restore the original paving, decayed edging stone replaced with new stones with original pattern and red sand stone slabs fixed below water outlets. Delhi quartzite is one of the heaviest known stones to man, with some of them weighting up to 1000 kilos. These were lifted up manually using belts and hand tool then reset in the plinth with a lime concrete base. Some of these stones were required to be chiseled and dressed to achieve reasonable finish and levels. Decayed and broken red sandstone edging stones were individually identified and marked on site and were reset in position as per the original pattern using lime mortar.

Where original stones were found missing, the voids were filled with similar DQ stones collected from secondary sources such as road kerbstones. The stone joints were filled using lime mortar and stone edges hand chiseled on site to make the surface more suitable for the visitors.

During the restoration process, the raised cement concrete platforms were dismantled carefully and replaced with hand-dressed sandstone blocks, and were located underneath each water outlet to avoid any damage to the lower plinth stones during heavy rains.

In 2010, the Delhi Quartzite stone blocks were restored on all the four sides of the lower plinth to the original pattern. The work which was undertaken during 2009-10 was carried out in phased manner, in a way that no tourist faced any problems while the work was ongoing, and the monument was never closed during that period. 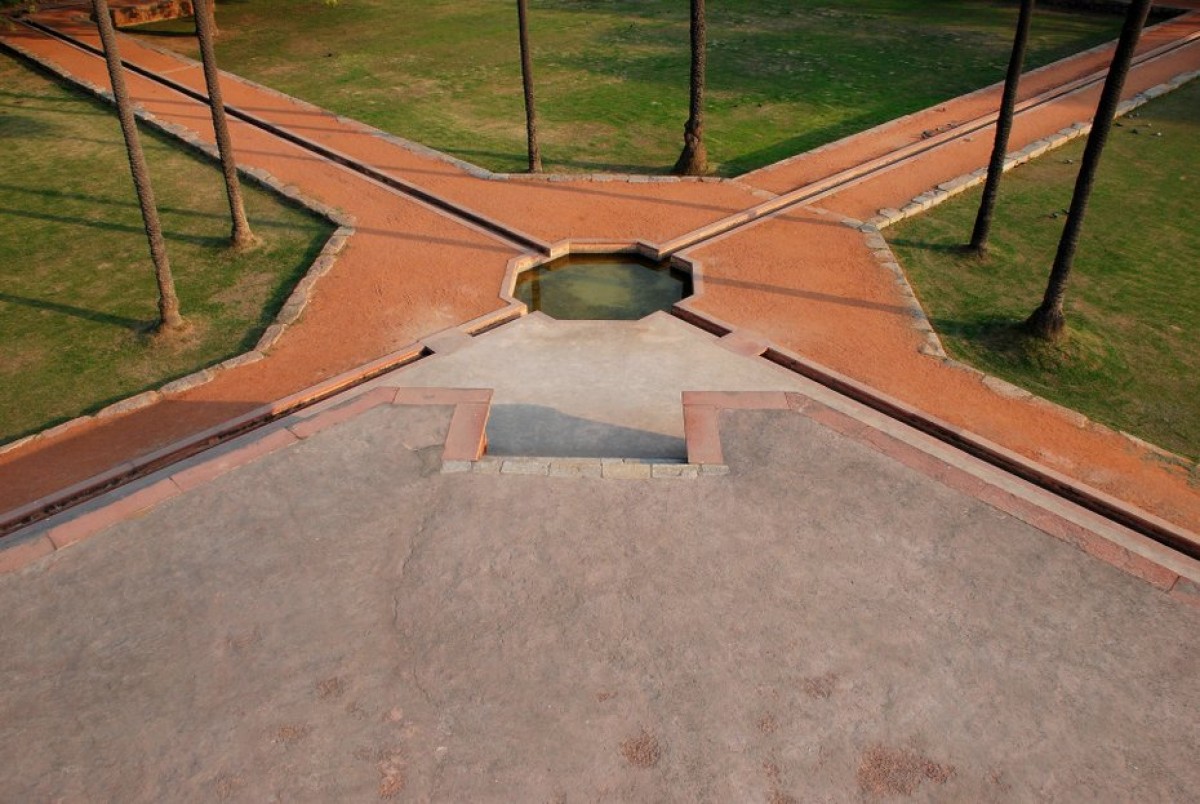 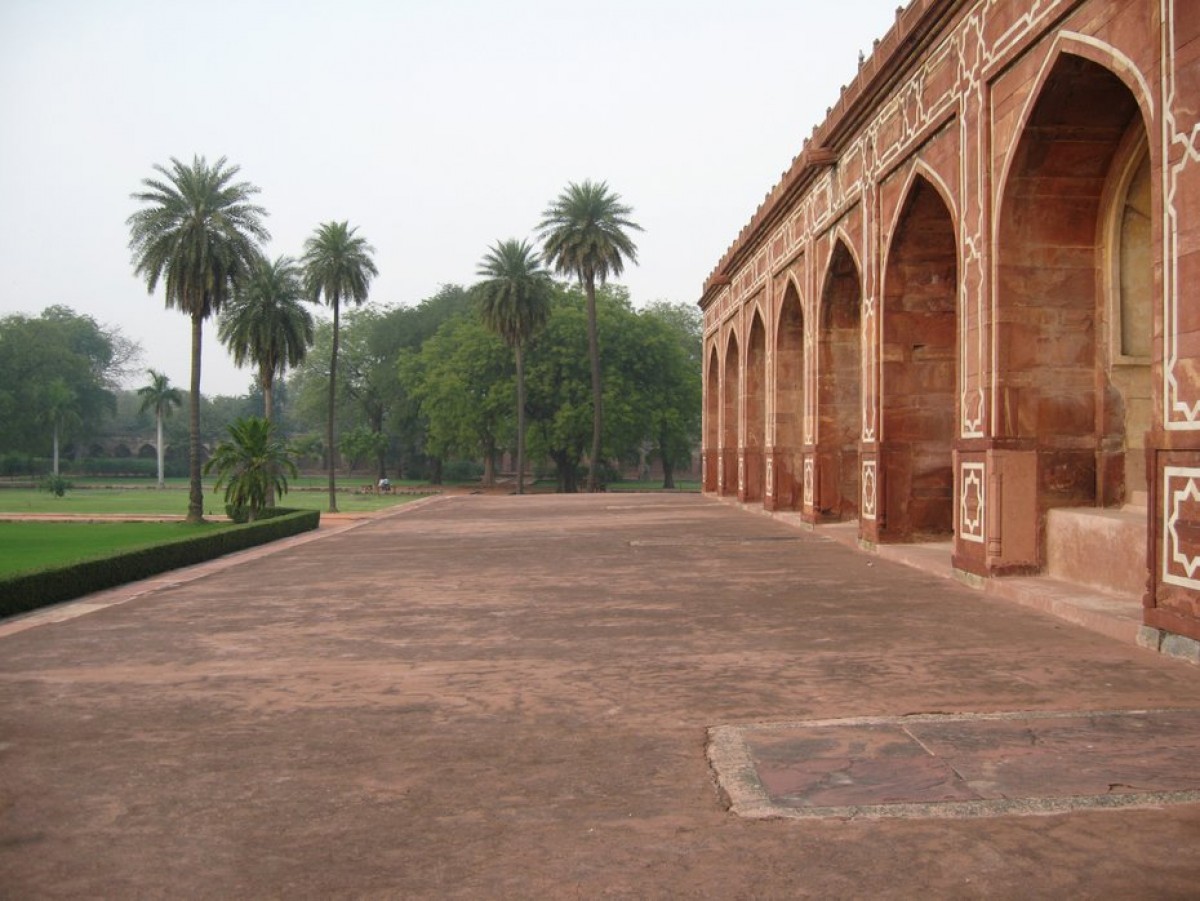 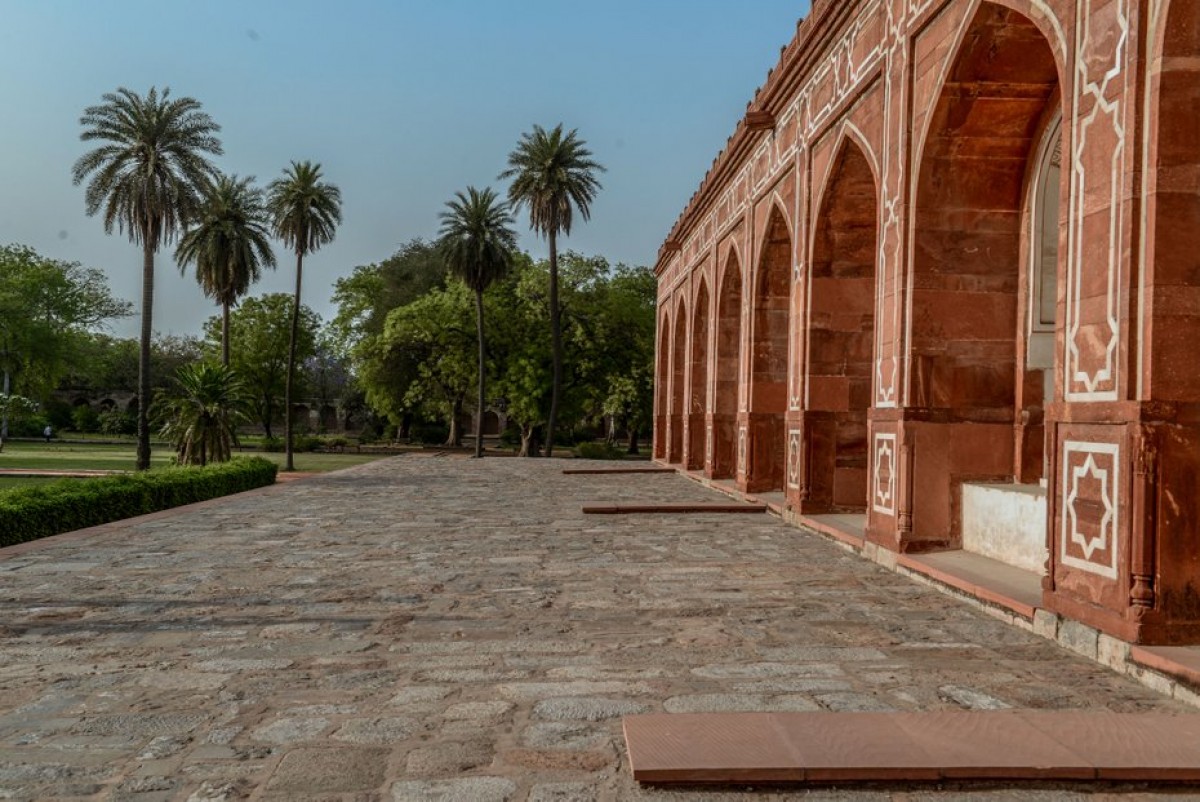 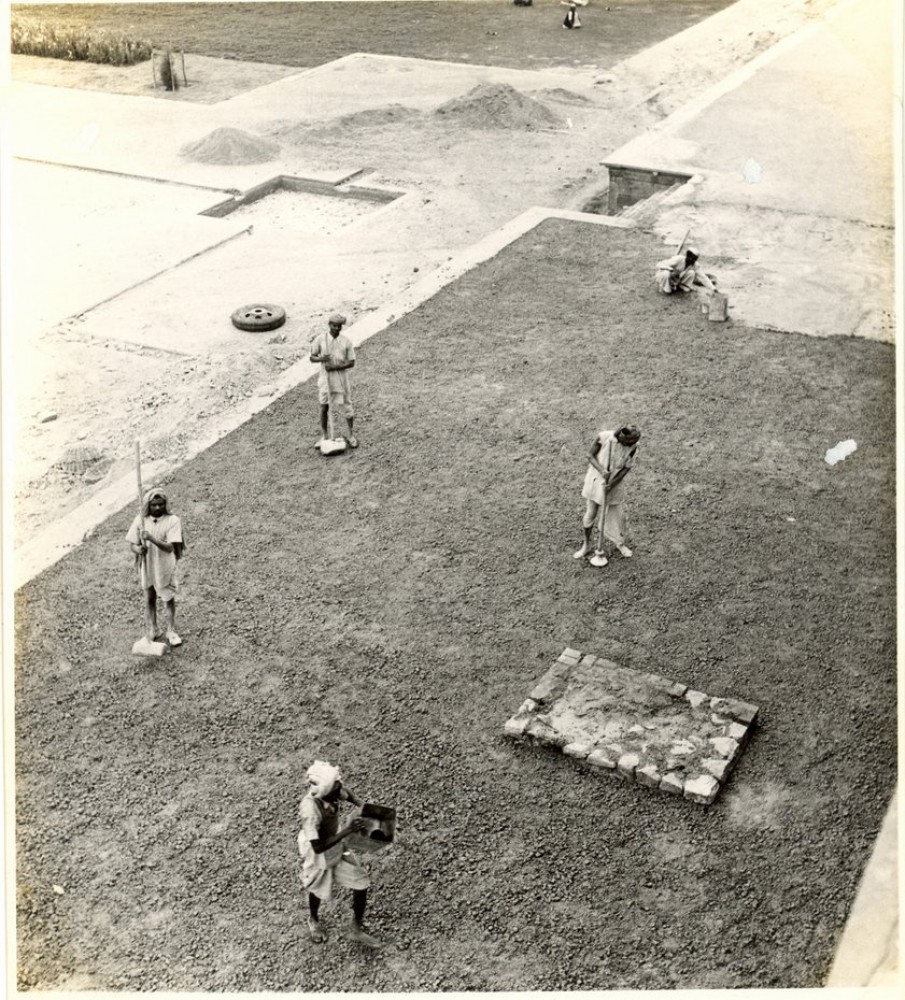 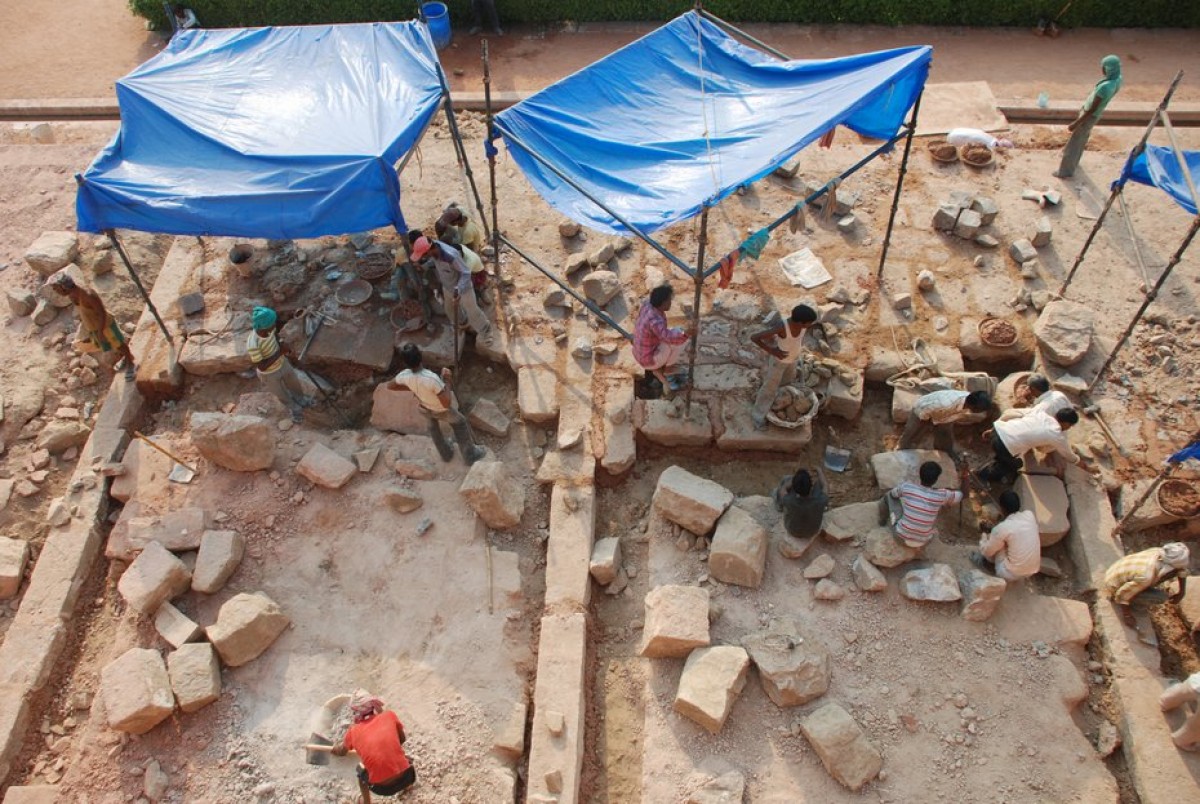 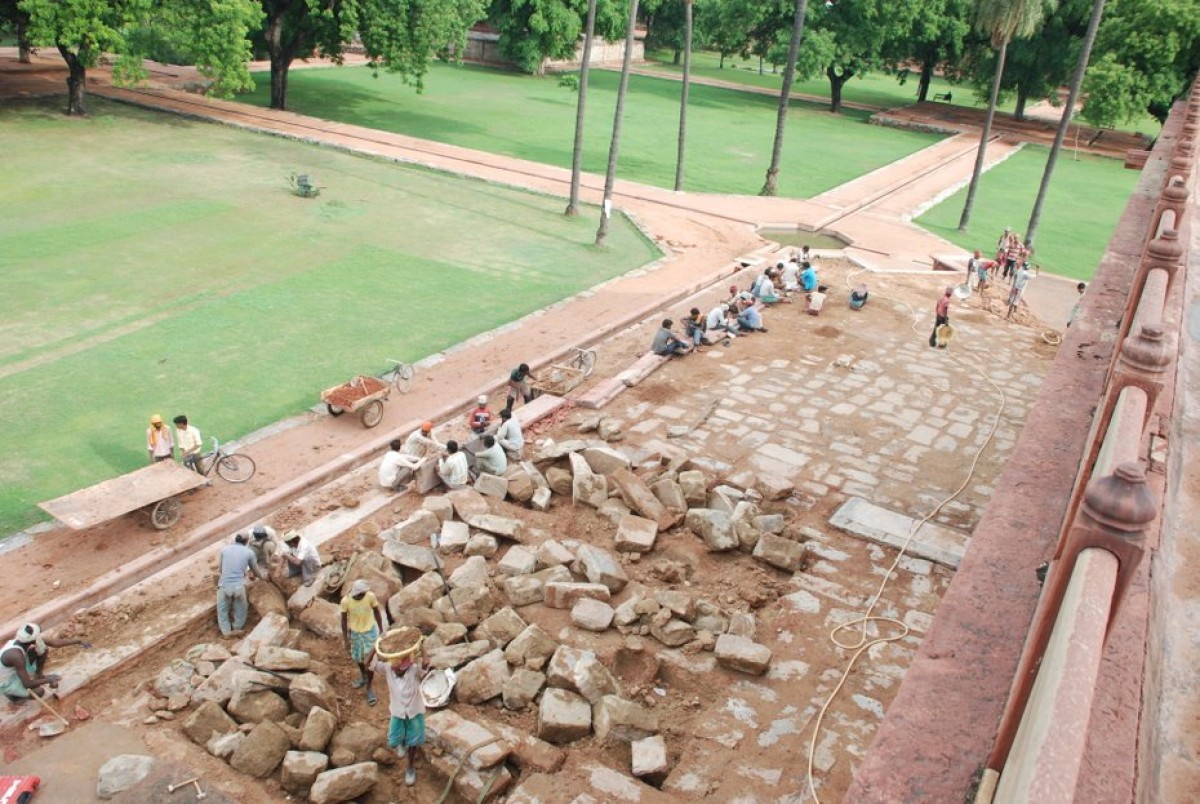 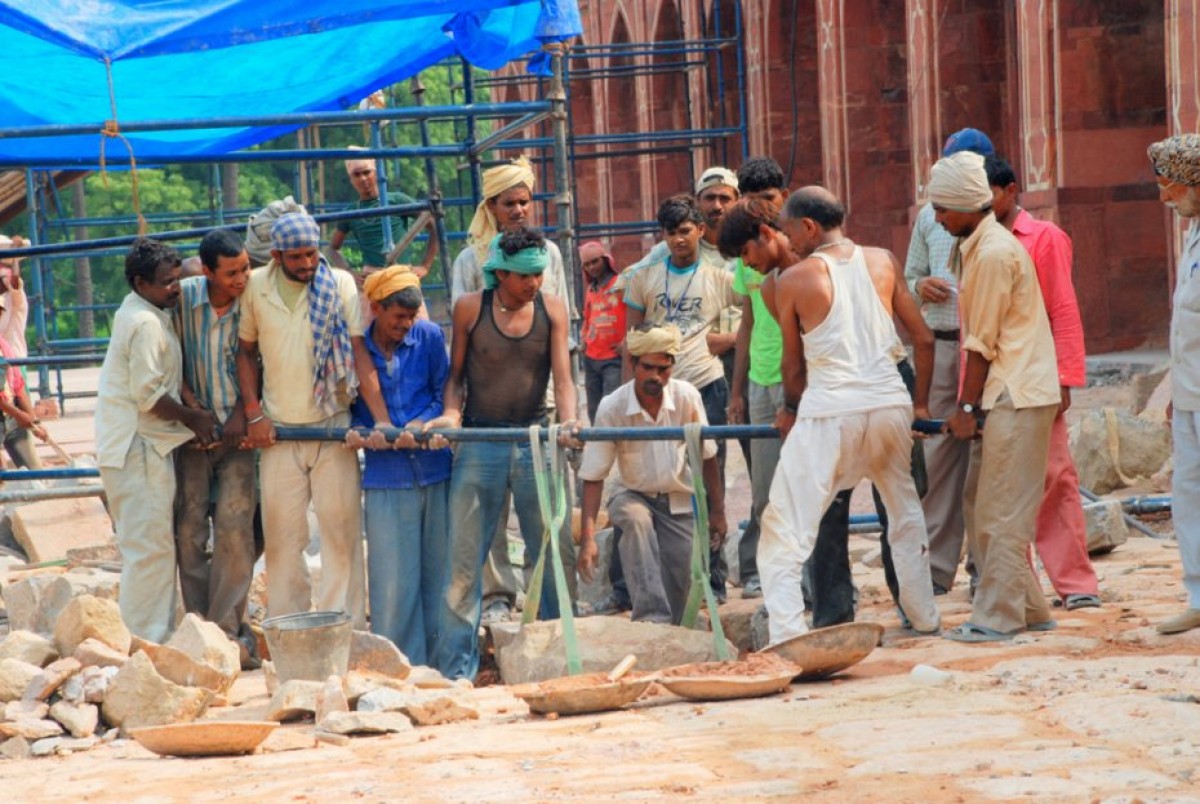 Lifting of heavy blocks of stone by craftsmen 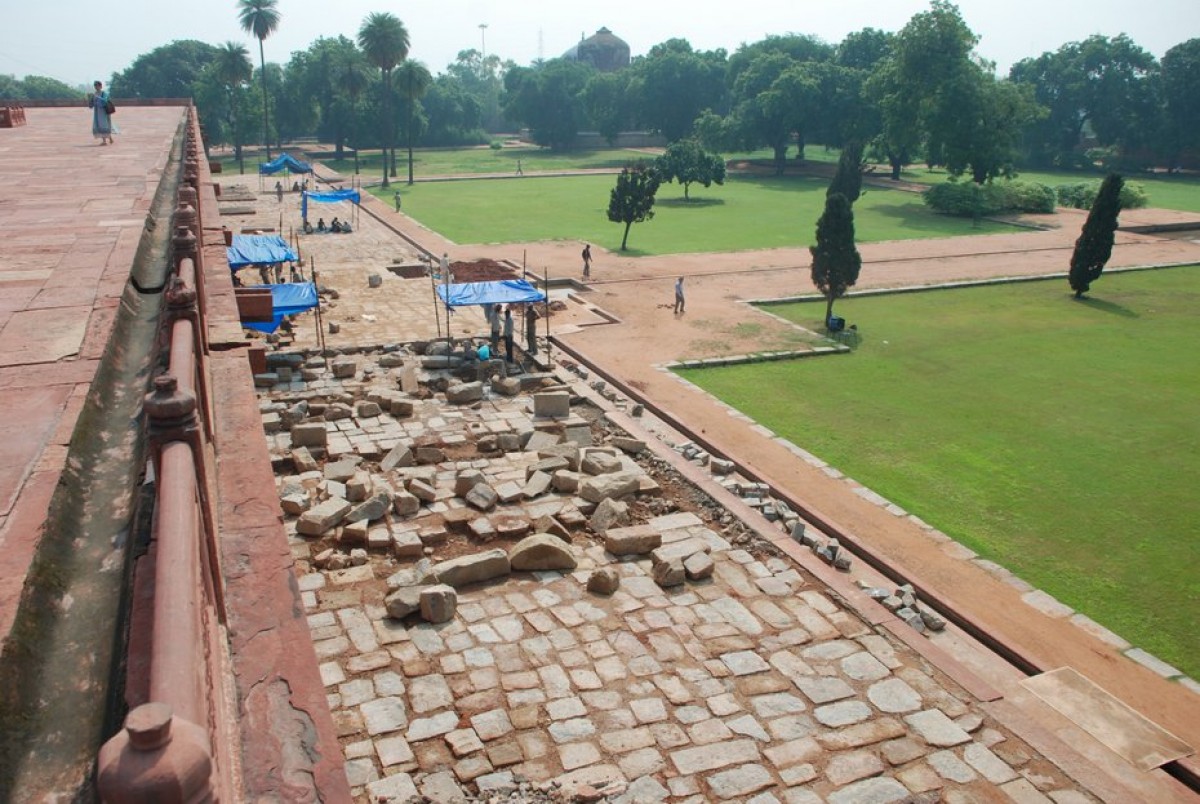 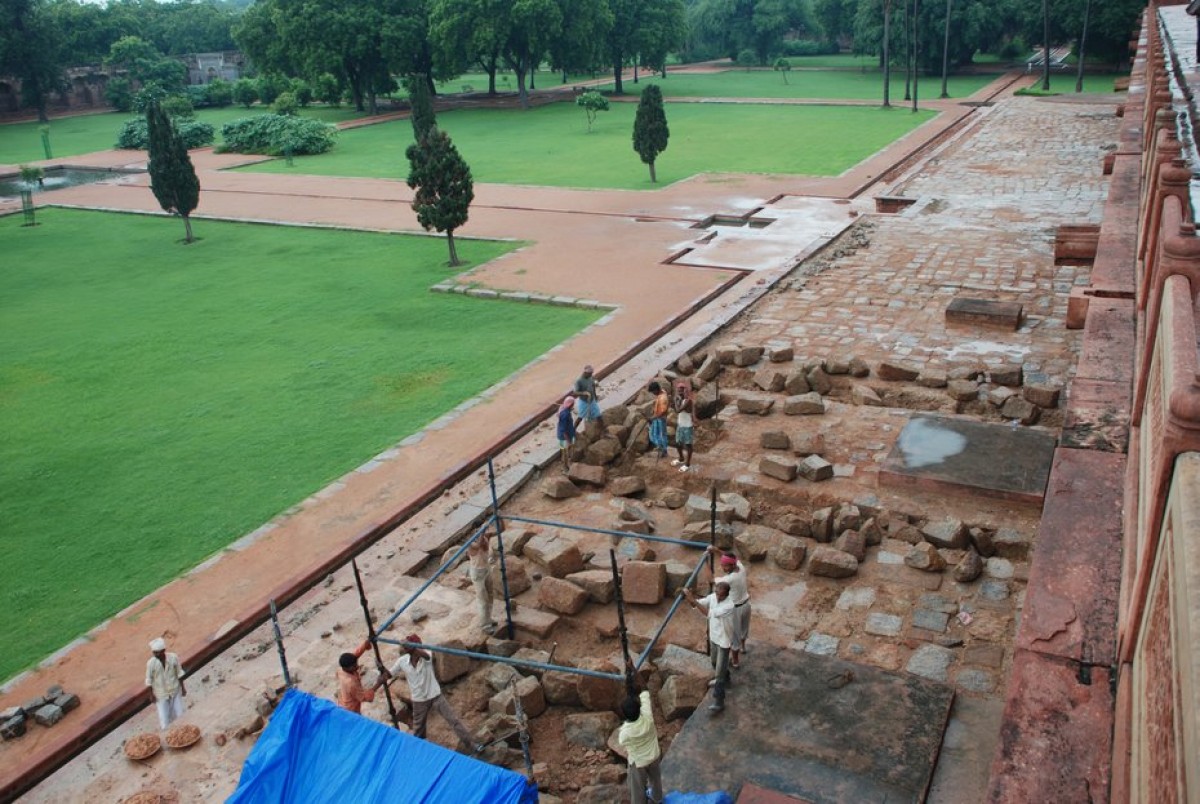 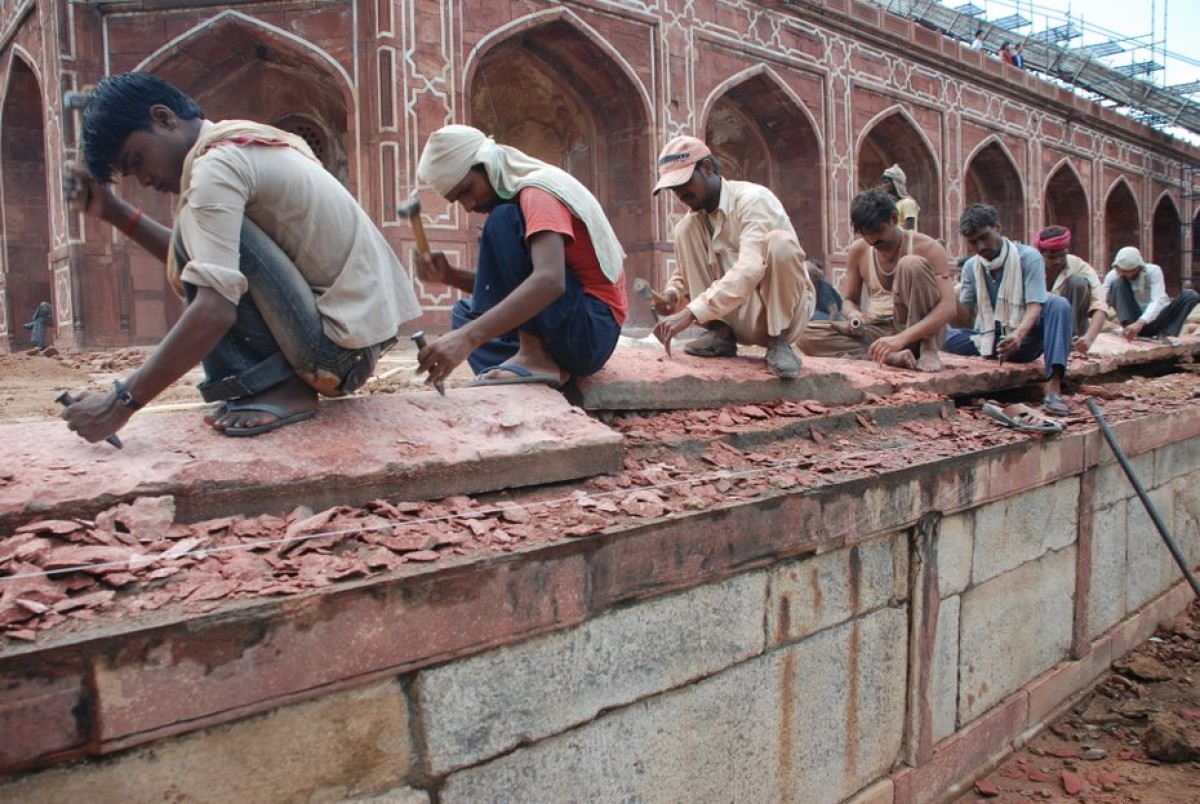 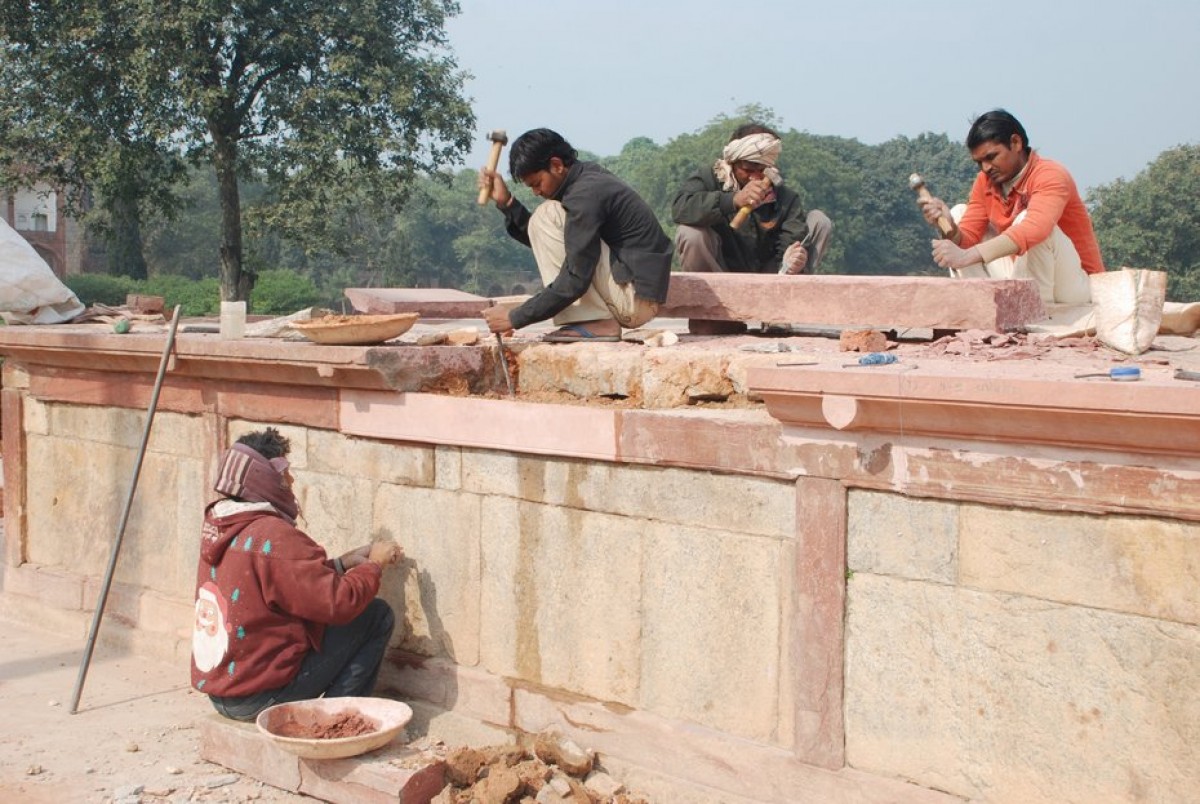 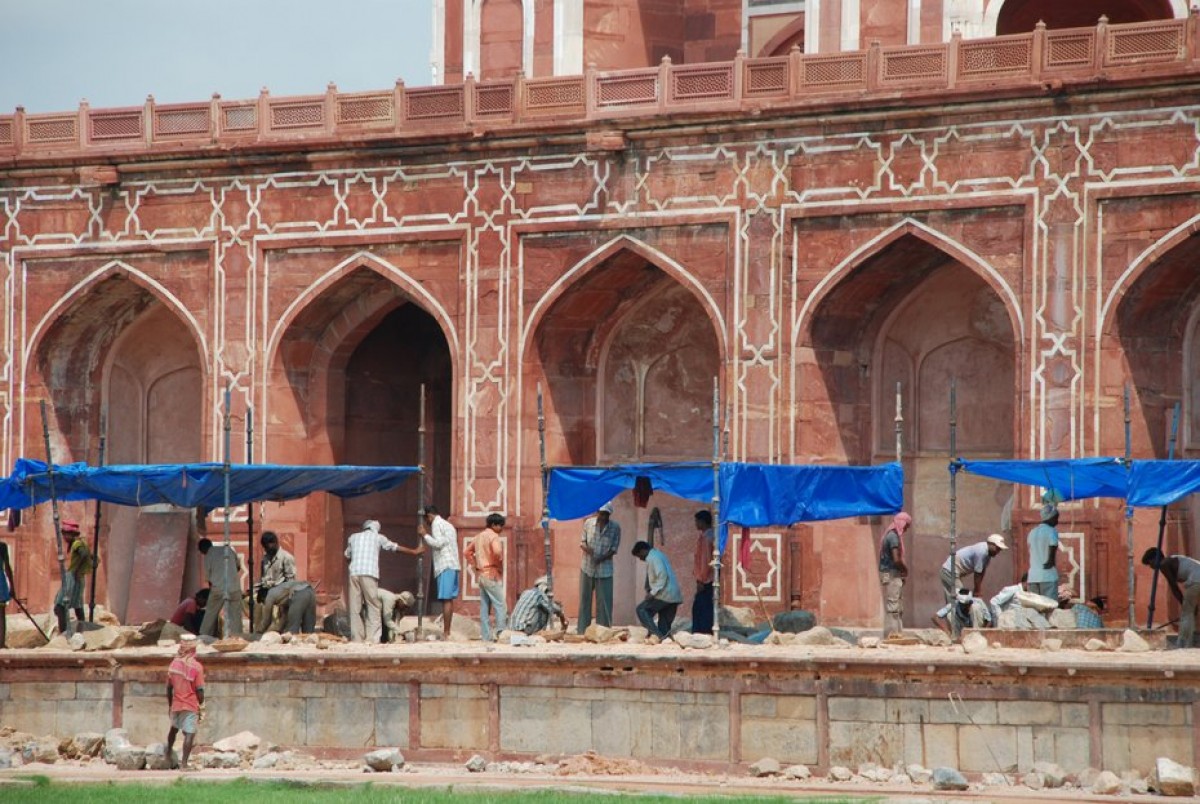 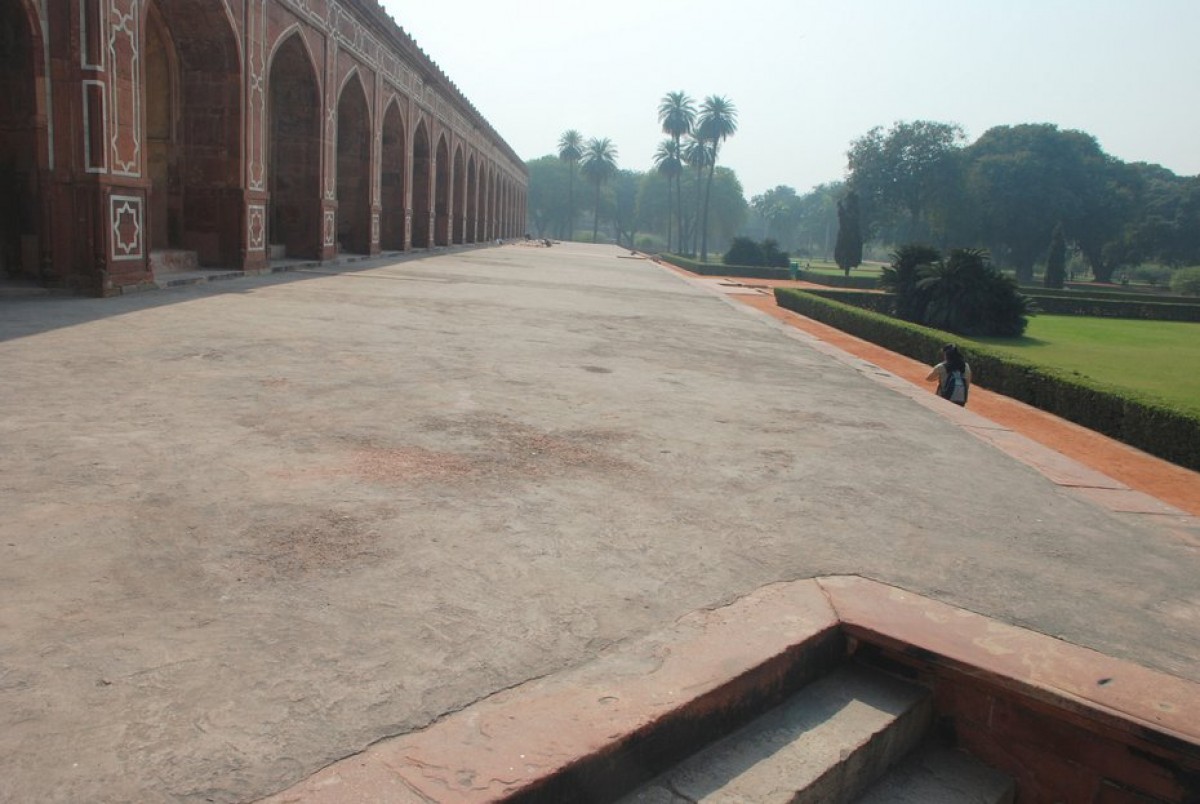 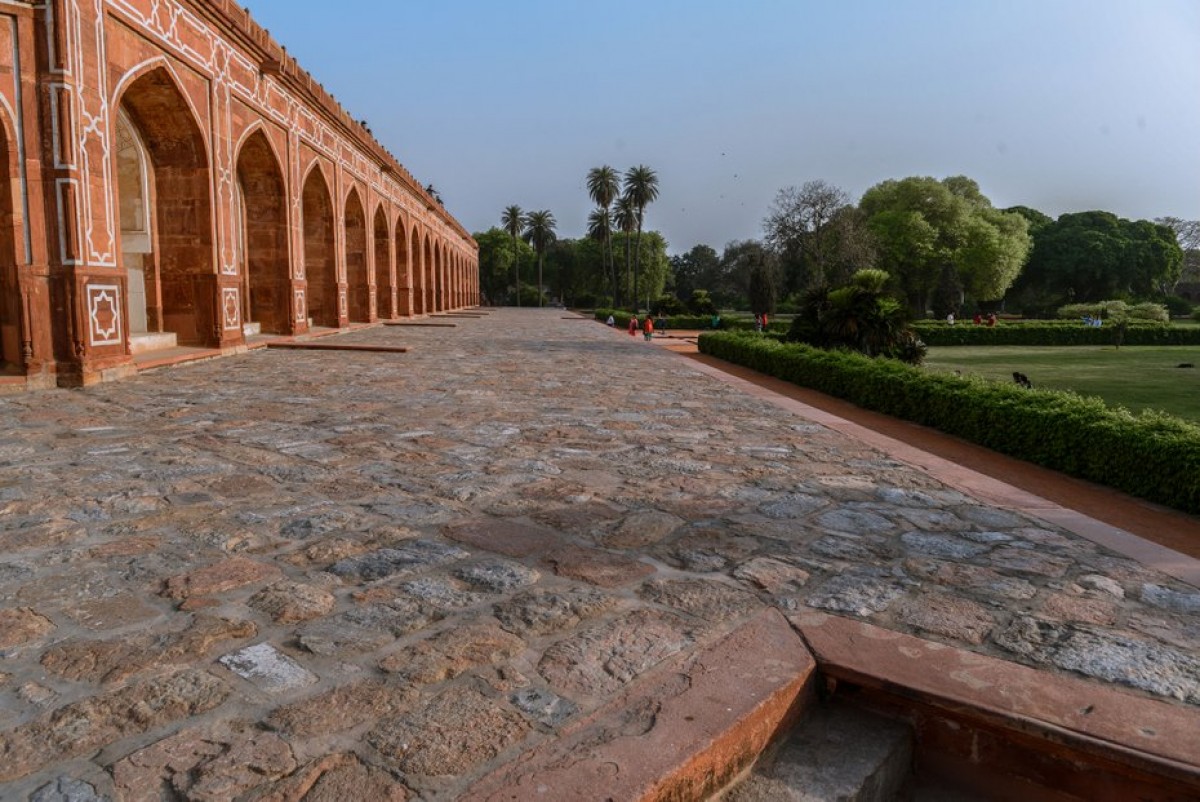